From the Life of General Thomas Pinckney

Since my visit to Charleston, South Carolina and St. Philip's Church Cemetery, I have learned a little more about Major General Thomas Pinckney. What a fascinating life he led. Want to know more about him? Read on!

General Thomas Pinckney's grandfather (Thomas Pinckney) came to South Carolina and made it his home in 1692. His wife was Mary Cotesworth. Thomas built a house at the corner of East Bay and Tradd Street in Charleston. He had full view of the harbor. He died in this home of yellow fever.


General Thomas Pinckney's father, Charles Pinckney, was educated in England and became a successful lawyer upon returning to Carolina. He accumulated a large fortune and was Speaker of the House of Assembly from 1736-1740. Charles married Elizabeth Lucas in 1744. This marriage produced our subject in 1750.

Thomas Pinckney was educated for 19 years in England at Westminster, Oxford. He read Greek fluently to the end of his life. In 1774, Thomas was admitted to the Charleston bar.

Pinckney's law career was interrupted, however, by South Carolina's preparation for the American Revolution. A volunteer company of rangers was formed in April 1775 in which Thomas was appointed a lieutenant. Soon after Lexington, two regiments were formed to defend the colony. Thomas Pinckney was named a captain. His company, part of the 1st regiment, was assigned to duty at Fort Johnson, on the southern shore of Charleston's harbor.

After the first attempt by the British to fire on Fort Sullivan, and the fort being successfully defended, Pinckney and the 1st regiment were moved there in August 1776. This would remain his headquarters for three years.

The following is taken from The Life of General Thomas Pinckney by Charles Cotesworth Pinckney, his grandson:


Captain Pinckney's reputation for handling troops was such that he was often detailed for special duty as instructor in military science. During the first three years of the war he was thus employed along the coast, as far south as Pocotaligo and Purisburg. On one of these tours an incident occurred which marked his firmness and decision of character. It was known to the military authorities that British emissaries from Georgia had visited certain posts, and tampered with the men. During his visit to one of these stations a mutiny broke out among the troops. The company on parade refused to obey orders, threw down their arms, and defied their officers. Persuasion, upbraiding, threats, proved alike unavailing, and the officers seemed about to give up the contest. Captain Pinckney, watching the situation from an adjoining house, saw that the time for parley had passed. Taking his sabre in his hand he entered the angry group, approached the ringleader, and cut him down at a blow. Ordering the company to resume their arms, and fall into ranks, he carried them through the interrupted drill, and turned them over to their officers in a far more submissive spirit than they had manifested. No man could be more averse to assume authority than one of Thomas Pinckney's temperament; he could exercise it promptly when duty required.

In 1778, the now Major Thomas Pinckney, with the joined forces of South Carolina and Georgia, went to help protect those frontiers from the English stationed in Florida.

In 1779, Major Pinckney took part in the battle of Stono Ferry. He was 2nd in command of the light artillery. "Major Pinckney gained great applause for his gallant conduct on this day. The battalion to which he was attached charged two companies of the 71st British regiment, and so completely routed them at the point of the bayonet, that only nine men were able to take shelter within their lines."

During the Siege of Charleston, Pinckney was stationed at the Horn redoubt, a mason fortification built along King Street. A piece of it still remains today. 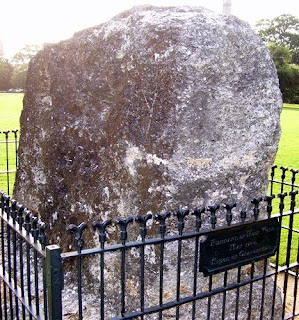 After Charleston fell, Pinckney went north and offered his services to Washington. Congress took active measures to recover South Carolina from British rule and ordered troops to be raised for this purpose. Pinckney was aide to the commander of these troops. Major Pinckney was severely wounded in the Camden battle. An old schoolfellow found him and had him removed with the wounded British soldiers. Mrs. Pinckney was summoned to care for her husband after the British retreated. When his wound was somewhat healed, Major Pinckney was a prisoner of war for more than a year, after which he was exchanged.

As soon as peace was restored, Major Pinckney resumed the practice of law in Charleston. In 1787 he was elected Governor of the state.

In 1791, Major Pinckney was given the position of minister to London. In 1795, he achieved a treaty with Spain that gave the United States free navigation of the Mississippi River. Later, Pinckney served two terms in Congress, ending in 1801. For the next decade, Thomas Pinckney had the life he loved, that of a Carolina planter.

For the War of 1812, Thomas Pinckney was appointed Major General of the southern half of the United States. His command extended from the southern borders of Virginia to the Mississippi, including North and South Carolina, Georgia, and the Indian Territory (Alabama, Mississippi, Louisiana).

Following the war, Pinckney spent the remainder of his days in agriculture.

Proudly serving your country was a trait Pinckney passed down to his three sons. The three swords which General Pinckney used in the American Revolution and War of 1812 were bequeathed to them with the requirement that "they never be drawn in any private quarrel, and never remain in their scabbards when their country demanded their service." Fourteen of Pinckney's descendants served in the Confederate Army during the Civil War.

Thomas Pinckney died 2 November 1828. A large military and citizen group followed his body in the procession from his house on Legare Street to St. Philip's Church and cemetery. 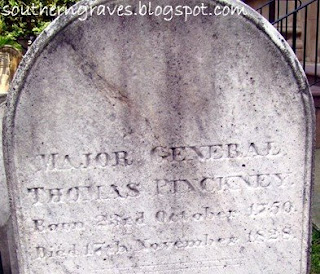 Anonymous said…
This is the best bio I have read online about pinckney. Gained an interest in his story while reading up on the presidential election of 1800 and his role in it. Thanks for the photos as well, nicely done.
May 3, 2015 at 6:30 AM