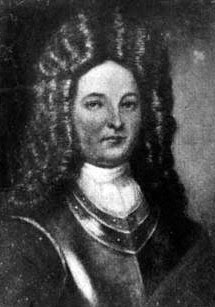 St. Philip's Church Cemetery has one more individual interred that I would like to jot down a few notes about. The following is from The Founders: Portraits of Persons Born Abroad Who Came to the Colonies in North America Before the Year 1701 by Charles Knowles Bolton.

"Colonel William Rhett was born, it is said, 4 September 1666 in London, although no trace of him can be found there in the accessible printed records. He seems to have been captain of a merchantman in early life, and made his home at Brentwood, County Essex. There he was married, 1 September 1692, to Sarah Cooke. The family arrived in South Carolina in November 1694...Colonel Rhett died 12 January 1722, when on the point of leaving Charleston to be Governor of the Bahamas.

...Rhet was colonel of the Provincial Militia, receiver general of the Lords Proprietors of Carolina, surveyor and comptroller of customs for Carolina and the Bahama Islands. When in command of the colony ships, in 1706, he repelled a French and Spanish squadron [an attack on Charleston], and in 1718 he captured the famous pirate, Major Stede Bonnet, after a brilliant but bloody encounter at Cape Fear. Bonnet's ship, the Royal James, and Rhett's flagship, the Henry, were both aground, careening in the same direction. The deck of the pirate ship was protected, but the Henry's deck was in full view od the pirates, and was swept by cannon and pistol fire for five hours. 'Rhett was,' wrote McCrady, 'of violent and domineering disposition, but his repeated and signal services to the colony demanded its gratitude and respect.'"


In hopes of a joyful Resurrection
Here rests the body of
Col. William Rhett
Late of this Parish,
Principall Officer of his Majesties Customs
in this Province:
He was a Person that on all occasions promoted
the Publick good of this Colony, and severall
times generously and successfully ventured his
Life in defense of the same.
He was a kind Husband,
A tender Father,
A faithful Friend,
A charitable Neighbor,
A Religious constant worshipper of God.
He was born in London
4th Sept 1666,
Arrived and settled this Country
19th Novembr 1694,
And dyed suddenly but not unprepared
12th Janry 1722
In the fifty seventh year of his age.
Rest in peace, Colonel Rhett.