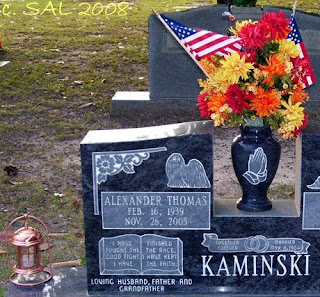 Amy at Graveyeard Rabbit of Central Ohio admits to her fascination with newer tombstones in her Hog to Heaven post. I have to agree with her. Many contemporary gravestones are beautiful and should be considered artwork, just as the old ones often are. The one for Alexander Thomas Kaminski is no exception.

An obituary from The Macon Telegraph, 27 November 2005:

"BONAIRE - Alexander T. Kaminski, 66, passed away after a lengthy illness on Saturday, November 26, 2005 at the Houston Medical Center. Services will be held at 11A.M. on Wednesday, November 30, 2005 in the chapel of McCullough Funeral Home with interment following in Magnolia Park Cemetery. Visitation will be Tuesday, November 29 from 7:00 until 9:00 P.M. at McCullough Funeral Home. Memorials may be given to The American Heart Association, 3312 Northside Drive, Suite 140 A, Macon, GA 31210 or The American Diabetes Association, One Corporate Square, Suite 127, Atlanta, GA 30329.

Mr. Kaminski was born on February 16, 1939 in Providence, Rhode Island. He was of Catholic faith. Mr. Kaminski graduated from the University of Mississippi and was a member of the Tau-BETA-Pi fraternity. He also served eleven years in the United States Air Force, and nine years with the 202 Engineering Installation at the Georgia National Guard. Mr. Kaminski was retired civil service with Robins Air Force Base. His parents, Alexander and Margaret Flynn Kaminski, preceded him in death."

Survivors include his wife, a son, a daughter, and five grandchildren.

FamilyTrees said…
That is a cool stone!

The one thing I don't like about some modern tombstones is how glossy some of them are. It can make it very difficult to get a good picture.