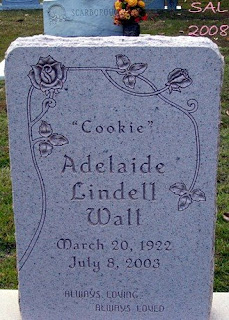 It's hard to tell from the photo, but Adelaide Lindell "Cookie" Wall's tombstone is pink. Very pretty and feminine. Mrs. Wall was born 20 March 1922 and passed away 8 July 2003. An inscription on her stone: "Always Loving, Always Loved."

"WARNER ROBINS - Adelaide Lindell Wall passed away Tuesday, July 8, 2003. Services will be at 10A.M., Saturday at the First United Methodist Church with burial in Magnolia Park Cemetery. Visitation will be from 6:00 until 8:00P.M. Friday evening at the funeral home.

Mrs. Wall was born in Mobile, AL to the late Vernon Eric and Lillie Mae Moore Lindell. She was preceded in death by her husband Col. James William Wall, USAF. Mrs. Wall was a born-again christian, a beloved mother and master gardener. As a member of the First United Methodist Church, she was involved in the United Methodist Women and the Wesley Fellowship Sunday School class. She was the former host of the church's TV mission program "Reach Out". Mrs. Wall was a member of the Officer's Wives Club where she served two terms as President and a member of the American Horticultural Society, the American Hemorcallis Society, the General Federation of Women's Clubs and the Women's Club of Warner Robins. She was a member and former secretary of the Warner Robins Daylily Club."