Crawford V. Watson: One of the Best Known 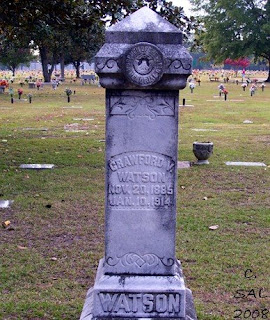 Magnolia Park Cemetery is the largest cemetery in Warner Robins (formerly Wellston), Georgia. The land for it was donated by Mr. Thomas Watson. It was originally used for his family burying ground, known as Watson Cemetery. Mr. Thomas Watson lived across the street from the cemetery. Magnolia Park as it is known today was not officially established until 1949. Crawford V. Watson, grandson of Thomas Watson, was laid to rest in Watson Cemetery in 1914. He was born 20 November 1885, the son of Richmond Hezekiah Watson.

I found a blurb in the 27 August 1911 edition of the Macon Weekly Telegraph stating C. V. Watson was sworn in as deputy sheriff of Houston county and moved to Perry to "assume the duties of the office." By the time of his death, his residence was back in Wellston.

In an obituary for Crawford V. Watson from the 11 January 1914 edition of the Macon Weekly Telegraph, the Watson family is mentioned as being one of the best known in Houston county. There are, even today, schools and roads named after this family. One of the main thoroughfares through downtown Warner Robins is known as Watson Boulevard.

Crawford V. Watson
Friends throughout Macon and Bibb and Houston counties will be grieved to learn of the death yesterday afternoon at 4:30 o'clock of crawford V. Watson, at his home, at Wellston. He was 27 years of age and had been ill only one week. Pneumonia is given as the cause of his death.

The Watson family is one of the best known in Houston county and the deceased was a member of the firm of Watson Bros., extensive planters and merchants of Wellston.

He was a charter member of the Cherry Camp, W.O.W., of Wellston and the members of the Woodmen of the World of Macon are invited to attend the funeral which will be held from the family residence at Wellston this afternoon at [1?] o'clock. The services will be conducted by Rev. Will Green, of Gray, Jones county. Interment will follow at the family burying ground near Wellston.