By S. Lincecum 16 November
Two beautiful tombstones at Sardis Cemetery in Bibb County, Georgia caught my eye recently. I liked them so much I wondered who made them. I'll have to start looking more closely at stones in the future for any signatures. The first gravestone is for Martha A. and B. F. Hudson. Martha A. was born Dec 19, 1849 and died Mar 4, 1919. Benjamin Franklin Hudson was born June 29, 1843 and died Feb 6, 1924: 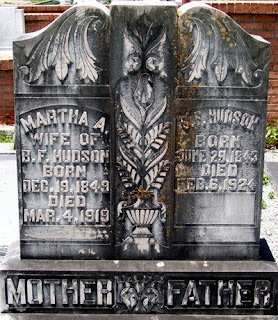 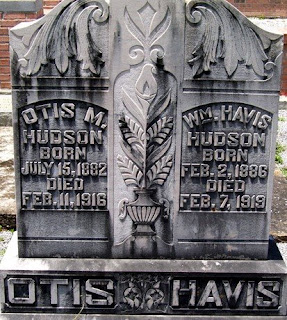 Mr. Benjamin Franklin Hudson lived less than five more years before being laid to rest next to his wife.

DaturaBee said…
Thank you so much for your superb curiosity...I have been trying to track down my ancestor, Matilda Lipsey, for. Months and she just disappears after the 1880 census. This link provides an integral piece of the proverbial puzzle. Carol W at spiritclean@yahoo.com