To Move or Not to Move

By S. Lincecum 02 November
Question: When photographing a gravestone, is it OK to move an object or objects blocking the inscription or in the way of the "perfect photo?" Hmmm. That's a tough one. While I don't think an all-or-nothing kind of answer is applicable, I often cringe when I hear people speak flippantly of moving objects from gravestones.

Have I ever moved something to read an inscription? Sure. So don't think I'm going "holier than thou" on you. However, I try to remember that more often than not, things were placed on that gravestone with purpose, love, and care.

I do want to point out a pet peeve of mine, though. I shudder to hear of rocks being removed from a gravestone. I do NOT remove rocks from gravestones. Even those little pebbles that are most likely gravel accidentally kicked there by a passerby. Remember this: Rocks often signify a visitor to a particular grave. That rock someone chooses to remove in order to "clean up" the stone and/or photo might've been put there on purpose. I think moving them is incredibly disrespectful.

Sometimes all it takes is a couple of photos or a different angle of your camera shot to get the entire inscription. Not all photos have to be taken "head on." The following is a simplified example, but you can get the idea. 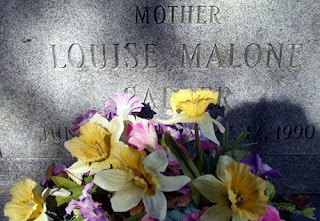 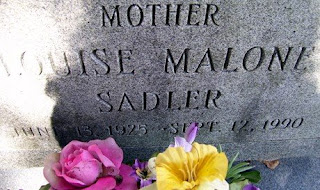 As you can see, between the two photos, the complete transcription can be read:

I'm about to embark on my first official graveyard expedition and this information is appreciated.