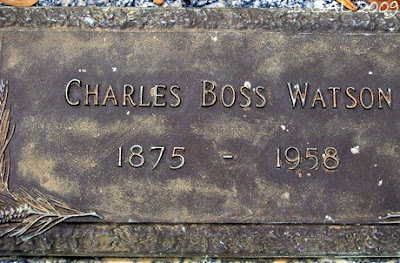 The WATSON family has been a fixture in the town of Warner Robins (formerly known as Wellston), Georgia since its inception. Charles "Boss" Watson was the son of one of the town's first residents. When the town was incorporated as Warner Robins in 1943, C. B. Watson was named the first mayor. And he did so much more --

The following is from "The Faces of Houston County" --
Building Houston County: A Watson Family Tradition, Part 1
by Sherri Martin for the Local Builder, Summer 2007.


As the plans for the town took a dramatic turn, the Watson's family involvement in the growth of the city also grew... Charles Bostick "Boss" Watson was a local farmer and businessman, co-owning a mercantile business. And if that were not enough, he was also a county commissioner and served as a member of the school board. "Boss" donated the land to build the Sacred Heart Church, and donated the land for the C. B. Watson Elementary School. Clearly, Boss Watson's plans for the town were bigger than just a grocery store.

Boss Watson is also considered to be a main reason the Army built the Wellston Air Depot in Houston County in 1941. It is now known as Robins Air Force Base.

[Update 4 September 2016: I originally had Ms. Martin's article linked above, but unfortunately the website where I found it no longer exists.]

Dorene from Ohio said…
Very interesting post! I used to always see the exit for Warner Robins, GA when my husband and I used to go the Ocilla, Georgia to visit his extended family in Irwin and Douglas Counties, Georgia.
January 16, 2009 at 7:12 PM

Leigha said…
Hello Stephanie, my name is Tiffany Watson and I'm researching my family tree, which led me to this post. The link to Ms. Martin's post is no longer active. I know this is an older post, but do you know if she has taken it down, or if it may still be active somewhere? Thanks a bunch!
September 4, 2016 at 12:49 PM

S. Lincecum said…
Glad you stopped by, Leigha. I'm sorry I do not know if the article is active anywhere else. The entire Local Builder site seems to be gone. I'll remove the link shortly.
September 4, 2016 at 1:34 PM