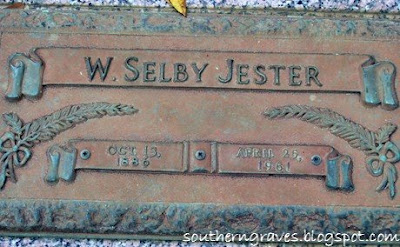 Selby's World War I draft registration card states the first initial of 'W' shown on the gravemarker above stands for William. He was born in Eupora, Mississippi, and his occupation in 1917 was farmer. Selby had a wife and three children at that time, and he was described as slender with brown eyes and dark hair.

In 1910, William and Minnie were still in Webster County, Mississippi:

By the way, Wikipedia describes a drayman as "historically the driver of a dray, a low, flat-bed wagon without sides, pulled generally by horses or mules that were used for transport of all kinds of goods."


By 1930, William and Minnie had made it to Lamar County, Georgia:

I found several references to Mr. Selby Jester in the online genealogy community. Some researchers suggest he was married a second time. These census records along with the gravemarker for Minnie Jester next to Selby's, and her death date being 11 months after his suggest, IMHO, there was no second wife.

Janice Tracy said…
I really enjoyed your interesting post about Mr. Jester. I was not familiar with the occupation of "Drayman," so I have learned something new. I wonder, however, if "Europa" was a mispelling of Eupora, MS.
January 21, 2009 at 5:43 PM

S. Lincecum said…
Thanks, Janice. I re-checked the draft registration, and my transcription was incorrect. It is Eupora, MS. Just another example of why collaboration is a great thing. I will correct the post now. :-)
January 21, 2009 at 7:59 PM