On the Road Again! For road trip #3, us girls decided to go to Savannah, Georgia. Unfortunately, we were not able to spend a whole lot of time there. In fact, we would arrive in Savannah around 10pm one day, and have to leave mid to late afternoon the next. That's less than 24 hours! You know what that means -- we had to prioritize.

Before I get to our respective objectives, let me tell you what my Aunt did. Before we even journeyed to Savannah, she made it clear that she would NOT go on a ghost tour. Therefore, I didn't bother lining one up. Upon arrival in the beautiful city and cruising the historic downtown area, we saw many tours ongoing. My Aunt then thinks a ghost tour would be OK since there are groups and much is out in the open. Now she often asks, "When are we going back to Savannah to take a ghost tour?" Whatever. We've moved on. ;-)

Back to the main story. The three of us each had an objective, all to be completed before we returned home. First and foremost, Starbucks was needed to start the day. Mom could care less about it, but she goes along because she is outnumbered. Next, my picture-taking Aunt had to get photographs of the fountain in Forsyth Park (yes, we had to pose in front of it). Then the cemetery lover in me HAD to visit the famed Bonaventure. Next, the true sight-seer and people-watcher (Mom) ultimately decided she wanted a simple drive around Tybee Island. She wanted to see how things had changed since her last visit, even though she hates change. (Love ya, Mom!) And our final objective was, of course, food. 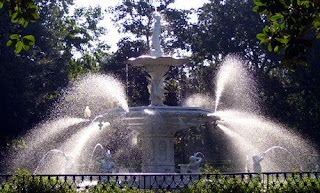 Forsyth Park was laid out in the 1850's, and the city of Savannah has done a great job of maintaining it for the past 150+ years. In addition to the awesome fountain (no picture I took could do it justice) and many moss-filled trees, there are monuments for a few Civil War figures. One was for Lafayette McLaws. 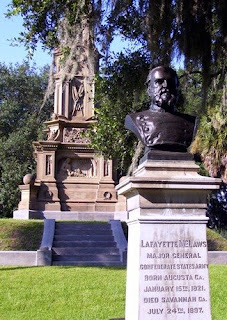 Also, at one entrance to Forsyth Park was a memorial for "the United States Marines from Chatham County, Georgia who made the supreme sacrifice in World War II." They were:

All transcriptions I made and photos I took are here at the Southern Graves site. I will include some of my favorites here.

Thanks for following me to Bonaventure Cemetery!

By the way, we did take that drive around Tybee Island, and we later ate at Uncle Bubba's (yep, Paula Deen's brother). I had a delicious crab cake po' boy sandwich. The cocktail sauce was sooooo good! I didn't have shrimp, but it was great on my fries. 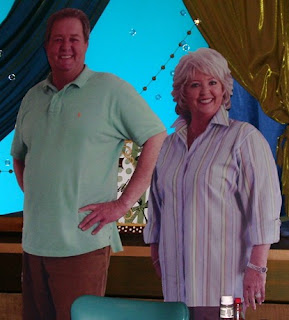 Diane Willard Kaufman said…
Thank you for visiting Tybee! I hope next time you'll stay with us and get to know the wonderful cemetery's even better. I love to go to Bonaventure as well! When you need a tybee fix, please visit my website and blog www.mermaidcottages.com thx you!
February 13, 2009 at 8:41 PM