By S. Lincecum 18 March
During a recent visit with my aunt, I was reminded that I had not blogged about our most recent road trip. "I've been tuning in," she said. Sounds like a polite way of saying, "I'm waiting." So here we go to Charleston, South Carolina.

I actually have blogged about the trip to Charleston last year in a few snippets. I'll link to them throughout.

The first great thing about our most recent road trip was the hotel. We stayed at the Francis Marion Hotel. It's a historical hotel, first opening in 1924. The Francis Marion underwent a $12 million National Trust award-winning restoration. I loved it. The only drawback I noticed was the bathroom was small. Didn't bother me, though. The view was fantastic. You could see much of downtown Charleston and the harbor. In the picture below, the steeple in the distance is from St. Philip's Church (more about that later).

The Francis Marion has a nice restaurant called the Swamp Fox. They cooked one of the best hamburgers I've ever eaten. 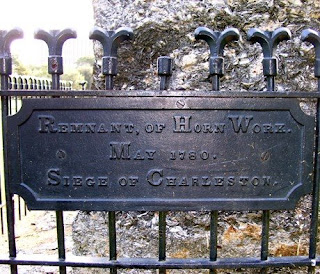 Across from the hotel was a small park containing a remnant from a horn work dating back to the Siege of Charleston in 1780, toward the end of the American Revolution. Yep, I touched it. 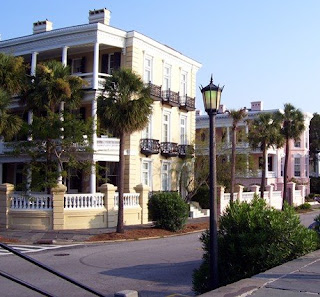 Battery Park is a place we went to a couple of times. The park has a storied history; it was a place for artillery during the Civil War. This landmark is also noted for its antebellum homes. Here are a couple of pastel colored homes on a corner. I have seen this row of houses in magazines many times.

Of course, no trip to Charleston would be complete without a visit to Fort Sumter, where the opening shots of the Civil War were fired on 12 April 1861. We took a nice boatride to the fort one morning. The temperatures were high, so a morning ride was nice and breezy. The museums at the dock as well as the fort were well done and quite interesting. Unfortunately, I did not get any photos of Fort Sumter I deemed worthy enough for this post. The trip was fun and informative -- take my word for it. One of the "neatest" things we saw was the flag that flew over the fort during the 1861 bombardment.

The boatride itself was, as I mentioned, enjoyable. We had good seats going both ways. Here is a photo I took not long after leaving the dock. Once again, you can St. Philip's Church steeple.

A few other noted things we did included eating at the Bubba Gump Shrimp Co., visiting the Old Slave Mart Museum, and browsing at Market Street. 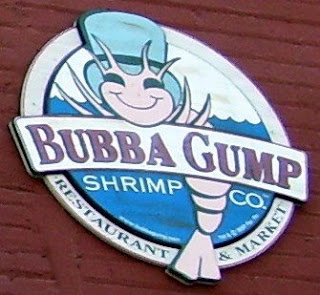 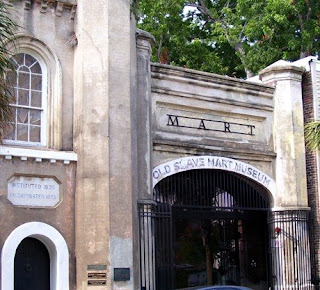 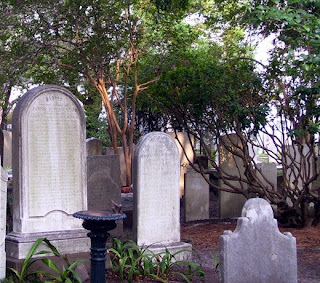 Onto the churches and cemeteries! Believe it or not, visiting a churchyard cemetery in downtown Charleston is not as easy as you might think. Many are only open for a few hours a day, and some are only open by appointment. Since I did not know this, we were not prepared for visiting these cemeteries. I did, however, ooh and ahh over many we passed by. One churchyard we were only able to get a glimpse of through the gates was St. Michael's. 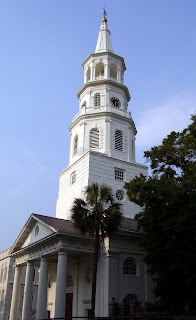 This is a church and cemetery to which I must return. St. Michael's is the oldest church edifice in the city of Charleston. The cornerstone was laid in 1752. Except for the addition of the sacristy in 1883, the structure of the building has been changed little. President George Washington worshiped at St. Michael's in 1791, and General Robert E. Lee worshiped there about 70 years later. The pews made of native cedar are the same as they have always been. All of this I learned after our arrival in Charleston. Again, I was unprepared for a visit. I must do better research! 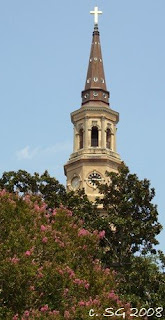 One churchyard we were able to visit was St. Philip's. It was established in 1680. This cemetery took my breath away. The stones and artwork were beautiful. I took many photos, as well as a short video. I hope you will follow the link to my page on Southern Graves dedicated to St. Philip's Church Cemetery. Edward Rutledge, a signer of the Declaration of Independence, is buried in the churchyard. Another notable figure, Major General Thomas Pinckney, is also buried there. I wrote about the Major in From the Life of General Thomas Pinckney.

There were several other churchyard cemeteries in downtown Charleston I will have to make a return trip to visit.

There was a couple of cemeteries I was prepared to visit. Bethany Cemetery and the famous Magnolia Cemetery. Bethany Cemetery is a 50+ acre cemetery owned by St. Matthew's Lutheran Church. It was founded in 1856. A large amount of the individuals interred are German. The landscape is picturesque and there are many beautiful stones. The photos and information gathered from Bethany were posted as contributions to FindAGrave.

Magnolia Cemetery's 128 acres on the banks of the Cooper River were once a 19th-century rice plantation. Buried here are around 35,000 people. Among them are 2,200 Civil War veterans (including crews of the Confederate submarine Hunley). Once again, I hope you'll follow a link to my Southern Graves page for Magnolia Cemetery. Included are several photos and transcriptions, as well as a couple of videos.

A final cemetery we visited briefly was St. Lawrence. I can't tell you much about this cemetery, but here are a couple of photos: 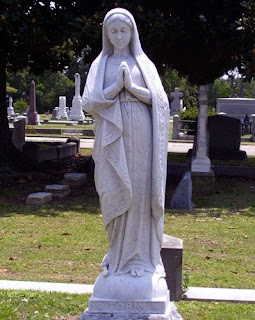 Something I barely mentioned early in this post is the high temperatures during our visit to Charleston, South Carolina. The heat was almost unbearable. Consequently, we did not do a thorough visit of Magnolia Cemetery, despite all the photos taken. I would love to return and spend even more time in this beautiful cemetery.

Now, for your amusement, let me add one thing... If you have read any of my road trip posts, you might remember my Aunt is quite the picture taker. I take them, as well, but mine are mostly of tombstones. :-) My Aunt prefers photos with family in them. (I know, what a novel idea!) Way back during our trip to Gatlinburg, I'm afraid a tradition was born. There now is at least one themed, or silly photo taken on each of our road trips. My Mom and I often have to wait for my Aunt to find a place to sit the camera, position us correctly, and set the timer. The final item for this post will be one such photo. I consider it appropriate since it was taken in Magnolia Cemetery under a "scary looking" tree. 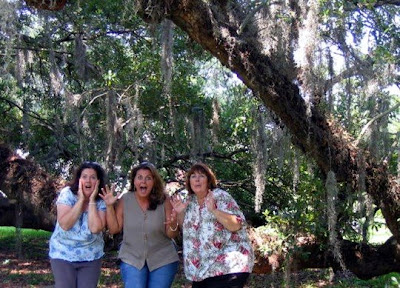