Gone Before Us, O Our Brother 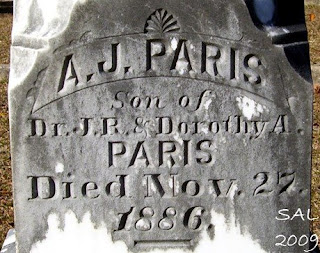 He was laid to rest in Hillcrest Cemetery; Reynolds, Taylor County, Georgia.

Census records suggest A. J.'s full name was Andrew Jackson Paris. He was the son of a local dentist, Dr. Jackson Paris. An obituary states A. J. passed away after suffering through a very long illness.

The back of A. J.'s urn topped, pedestal tombstone displays the following epitaph:
OUR
BROTHER JACK
Gone before us, O our brother,
To the spirit land!
Vainly look we for another
In thy place to stand.
This epitaph is from a poem entitled "Lines on the Death of S. Oliver Torrey" by John Greenleaf Whittier. Wikisource describes Mr. Whittier as "an American Quaker poet and advocate of the abolition of slavery in the United States." S. Oliver Torrey was secretary of the Boston Young Men's Anti-Slavery Society.1

While the entire poem is linked above, I will include the first and last stanzas here.

Gone before us, O our brother,
To the spirit-land!
Vainly look we for another
In thy place to stand.
Who shall offer youth and beauty
On the wasting shrine
Of a stern and lofty duty,
With a faith like thine?...

...Peace be with thee, O our brother,
In the spirit-land
Vainly look we for another
In thy place to stand.
Unto Truth and Freedom giving
All thy early powers,
Be thy virtues with the living,
And thy spirit ours! 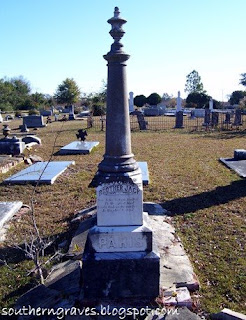 As you can see, Mr. A. J. Paris was greatly loved. An obituary from the Macon Weekly Telegraph, 4 December 1886 (viewed online at GenealogyBank) also shows this:

"Reynolds -- Death of Mr. A. J. Paris.
REYNOLDS, December 3, -- Mr. A. J. Paris, after a severe illness of eight weeks, died on Saturday night last at his father's residence in Reynolds. He had the best of attention from skilled physicians and kind nursing from loving hands and fond hearts who doted on him. No young man in the town and community would be so much missed. He had an extensive acquaintance and a great many friends who will regret to learn of his untimely death. The grief stricken family has the sympathy of the entire community."