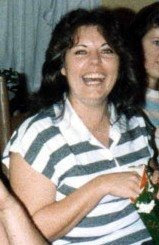 Cynthia Logue Barrentine: Daughter, Sister, Aunt, Wife, Mother, and Friend. We lost my Aunt Cindy almost nine years ago, and, for me, it's still hard to think about her without longing to see her again. Hear her again. Hug her again...

The topic for the upcoming Carnival of Genealogy is "Mothers." My first instinct, of course, was to write about my own mother. She raised me and taught me so much. In fact, she continues to raise and teach me! Not only as my mother, but now as my friend. However, I don't think my mother would mind that I was guided to her sister Cindy.

I am constantly reminded that Cindy left behind a daughter. She's in high school now, and I cannot imagine how she must ache for her mother. This post, however, is from my point of view. And that is how I intend to tell you about Cindy.

Cindy was one tough lady. The phrase, "cuss like a sailor," would fit her just fine. What was funny, though, was (as far as I could tell) she was the only one who could get away with it in my grandparents' (her parents) home. Four siblings grew up in that household, but only one would let 'em fly. Why? I guess because, well, that was Cindy.

To further illustrate the "one tough lady" remark: During our last conversation, Cindy told me to be sure to "not take sh*t" from anyone. To put it mildly, her opinions were not filtered, and they were freely given. She always knew when and where to give them, though. She would never embarrass you. Time and place were something she had an instinct for.

During my times with just her, her words were always kind. This tough woman had a heart full of love, and I never doubted it. I know now that she was always teaching me. Back then, it just seemed like goofing off and having fun! :-)

When I got a little older, she continued to keep me under her wing. Something I will always remember was she refused to let me call her ma'am. I was raised to say "yes, ma'am; yes, sir" and the like. Of course, when I was around a lot of family members, it would come naturally and often. If I addressed her in that fashion, though, her response would be, "What?!" Sometimes it would take me a minute to get what she was referring to, but then a light bulb would go off, and I would apologize.

Some might not think that whole scenario to be a big deal, but it conveyed a lot to me. Cindy believed her and I to be equals. I could speak to her about anything (and I did), and she would return the favor.

And Cindy was the most non-judgemental person I have ever known! She treated everyone the same, with whatever respect they deserved. She would strive to give a person whatever needed to better their self and their life.

While Cindy was a firm believer in God her whole life, when her daughter was born she strengthened her walk with Him. She knew her daughter being surrounded by family and friends would not always be enough. Cindy was a wonderful role model for her child, giving her the foundation I believe she needed to live fully without her mother physically by her side.

Maybe that's one of the reasons a statue in Bonaventure Cemetery struck me so. It was an angel, and just below her feet was the inscription "Cindy." This memorial was, of course, for another woman who went by that name. And while I'm sure the other woman was equally deserving, that image always comes to mind when I think of my Cindy in her Heavenly form.

There's so much more I want to tell you about Cindy -- how she was the one who enabled me to watch scary movies, how she liked her oatmeal cookies so soft they would melt in your mouth, how her potato salad is to this day my favorite food, how she was NOT a morning person, how she always told me to watch out for snakes when I left her house, how her laugh was quiet yet contagious... how I can still feel her love, even at this very moment.

Caroline said…
Great post. Your love for your aunt is endearing! I see that you, too, had an angel in your midst, and that you are so much "more" for it as well...

Greta Koehl said…
Absolutely beautiful - you have really brought Cindy's personality to life.
May 14, 2009 at 9:21 PM

Judith Richards Shubert said…
What a beautiful tribute to a wonderful aunt! Your Cindy must have been loved my many. What a tragedy to have her leave you here when she was so young.
May 20, 2009 at 1:58 PM