By S. Lincecum 24 June
When I learned the topic of the newest edition of the Graveyard Rabbit Carnival [now defunct] is going to be "Obituaries," my first thought was "I can do that!" Soon after, however, I became somewhat overwhelmed. Sounds silly, maybe, but true. I have, at the very least, hundreds of tombstone photos to choose from. How do I pick one?

I recently visited the Byron City Cemetery in Peach County, GA for some other business and thought I'd choose a stone there. Nothing seemed to grab me, though. When I got home and loaded the pictures I did take into my computer, I started looking at photos from some of the other cemeteries I've visited. I don't quite know how it happened, but I fixated on William Wesley Middlebrooks. 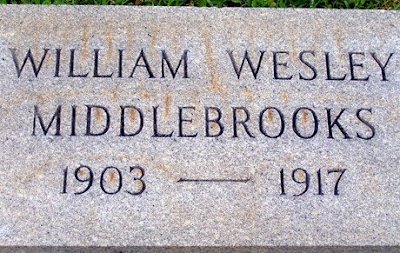 As you can see, there is nothing special about Wesley's gravestone. It's a simple granite block with his name, birth year, and death year: William Wesley Middlebrooks, 1903 - 1917. Wesley is buried in Liberty Church Cemetery; Bibb County, Georgia. He is buried next to his father, William Green Middlebrooks (1872-1943), as well as (presumably) his mother, Fanny Huff Middlebrooks (1876-1957), and his sister, Ruth Virginia Middlebrooks (1896-1910). All of the Middlebrooks' stones are the same, and I think they were added some time after their deaths.

Wesley's obituary turned out to be somewhat easy to find, thanks to the Internet and the databases at GenealogyBank.

William was one of the brightest boys of the Rutland high school and was also a prominent member of the Boys' Pig Club, his pigs having won blue ribbons at the State fair. He was well liked by all who knew him and he numbered his friends by the score, all of whom will be grieved to learn of his death.

Young Middlebrooks was an enthusiastic young farmer and his father, the Bibb County farm demonstrator, was planning to turn over to him the management of the Middlebrooks farm on Jan. 1.

The funeral services will be held this (Wednesday) afternoon at 2:30 o'clock from the family residence near Walden. The services will be conducted by Dr. C. R. Jenkins, of Wesleyan College, and Dr. G. L. Yates, pastor of the First Baptist Church, and the interment will be in Liberty Chapel cemetery.

I like this obituary because it tells a good bit about young Wesley. It's often hard to find information about individuals that pass away at a such a young age. 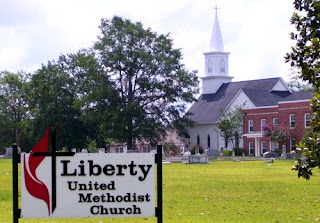 Liberty Chapel is now known as Liberty United Methodist Church. The church and the cemetery are located on Liberty Church Road, where it meets Houston Road. The cemetery is a large one, and my visits are always pleasant. If you go at the right times, you can hear the beautiful sound of the church bells ring.

Judith Richards Shubert said…
What an interesting post! I'm sure his parents were heartbroken to lose their young child whom they had such high hopes for. That obituary headline sure catches your eye! Thanks for sharing his story.
July 2, 2009 at 12:56 AM

S. Lincecum said…
It caught my eye, too!...I'm sure you are right about the heartbroken parents. An interesting note is that a daughter of theirs passed away at age 14, as well.
July 2, 2009 at 3:21 PM

Unknown said…
Just goes to show that everyone has something of interest that needs to be revealed! Thanks for finding his story. Nicely told!
July 2, 2009 at 8:40 PM