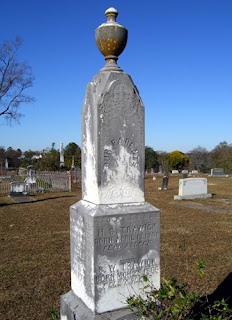 This pedestal tombstone with an urn top is located in Hillcrest Cemetery (aka Reynolds City Cemetery); Taylor County, Georgia. I was a little confused by it, at first. On one side, there is an inscription for H. S. Trawick, born April 19, 1860, Fell Asleep ______ & S. W. Trawick, born Mch 28, 1866, Fell Asleep ______. I've seen many stones for couples with one death date missing, of course, but having both death dates never inscribed is much less common. There are two gravestones on the ground beside this larger memorial with completed dates, however. Henry S. Trawick died 21 April 1915, and Susie Waters Trawick died 14 December 1911.

I imagine the large tombstone was erected around 1901 for M. D. Waters and L. W. Trawick. Maybe it was at that time Henry and Susie Trawick decided to be buried in Reynolds, as it is possible their birth dates were inscribed on the stone at the same time. Ten years later, Susie would pass away in Columbus, Georgia, where the Trawicks had recently moved from Reynolds. Four years after her death, Henry would pass away at his home in Russell county, Alabama. Reynolds still was to be their final resting place.


HENRY S. TRAWICK DIED SUDDENLY
PASSED AWAY THIS A.M., AT HIS HOME IN RUSSELL COUNTY, ALA. -- REMAINS TO BE CARRIED TO REYNOLDS, GA.
Mr. Henry S. Trawick, aged 54 years, died suddenly this morning at 5 o'clock at his home in Russell county, about ten miles west of Columbus, from an attack of acute indigestion.

It was stated this morning that Mr. Trawick was in his usual state of good health yesterday and last night he was feeling a little bad with indigestion and took a few home remedies, thinking that he would be all right this morning. About 12 o'clock, his son, Paul Trawick, went into his room to inquire about him and his father states that he was feeling better. His younger son, Dudley, slept with him and woke up this morning before 5 o'clock and went out to the kitchen and told the cook that he did not like the way his father was looking, and the family went into his room and found him dead.

Mr. Trawick was one of the largest planters in this section of Alabama, and was well known throughout the county and in Columbus, where he had a large number of close friends. He was a good man, standing for the very best of everything and was held in the highest esteem by all with whom he was acquainted.

Surviving Mr. Trawick are two sons, Messrs. Paul and Dudley Trawick, of Russell county, and one daughter, Mrs. Kinsel Berry, of Columbus. Mrs. Trawick passed away several years ago at her home in Wynnton, shortly after moving to Columbus from Reynolds, Ga.

The remains will be carried to Reynolds, Ga, this evening at 10 o'clock, where the funeral and interment will be conducted tomorrow morning at 11 o'clock.

Their many friends both in Columbus and Russell county deeply sympathize with the family in their hours of sad bereavement.