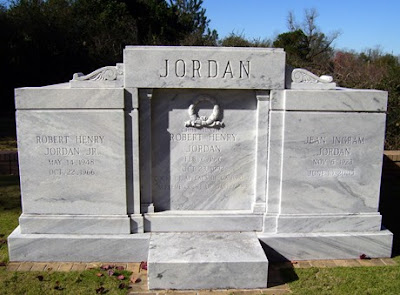 Just inside the entrance to Oak Hill Cemetery in Talbotton, Georgia is what looks to be an above ground vault for the Jordan family. While I think it was designed as such, it's likely a false crypt. This large, beautiful memorial is made of marble and contains the following inscriptions:

The Georgia General Assembly, in House Resolution 25, stated Robert Henry Jordan served his country with honor, was an outstanding legal scholar, and was an exemplary public servant. The portion of U.S. Highway 80 from downtown Talbotton, Georgia, east to the Taylor County line is designated as the Robert Henry Jordan Memorial Highway.