By S. Lincecum 04 September
The obelisk, a form of Egyptian architecture that is said to represent a ray of sunlight, is fairly common in the southern cemeteries I have visited. What I don't see very often, though, is the double obelisk. I found an example of this in Oak Hill Cemetery, located in Talbotton, Talbot County, Georgia. This is a single stone, but there are two obelisks attached -- one for Mr. Freeman and one for Mrs. Freeman. Looking closely, you can see where both of these sculptures have been repaired. I don't know if this was due to vandalism or nature. 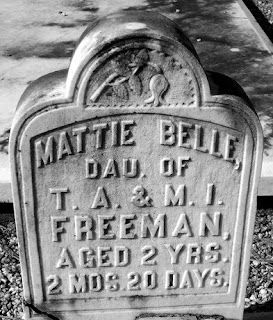 Nearby rests the little daughter of Mr. and Mrs. Freeman, Mattie Belle. She was but 2 Yrs. 2 Mos. 20 Days. Inscribed on the back of her stone is this: "She was but a jewel lent us, To sparkle in our midst awhile. Then God called and took His treasure, Before she knew an earthly guile."