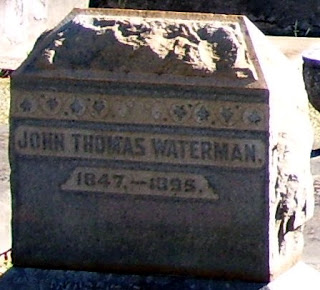 Sometimes a wander through the graveyard is just that - a wander.  Not a thorough research trip, as I would always like to have the time to conduct.  Such was the case when I visited Oak Hill Cemetery in Talbotton, Georgia almost a year ago.  Consequently, this is the only photo I have of the rough-cut granite headstone for Mr. John Thomas Waterman.  It is from a farther away shot I cropped down.  To even further complicate things, I never really studied the entire gravesite of Mr. Waterman.

What's the big deal, you ask? After a bit of research, Mr. John Thomas Waterman has become one of those "people I wish I knew." Sometimes this happens when I begin researching an individual represented only to me by a stone in a cemetery.  What I learn leads me to think they were charming or funny or otherwise interesting in some way, and I wish I could've known them "in their time." Mr. Waterman is an example.

The basics of John Thomas Waterman are this:  he was born in 1847 to Joseph and Caroline Waterman, likely in Jones County, Georgia.  His father was a teacher, retail merchant, and photographer from Maine.  John married Annie Brown of Talbotton, and they had a few children.  John died in Atlanta, Georgia in 1895.

John Thomas Waterman was a newspaper man.  He bought, ran, and sold several newspapers in the course of his lifetime.  It appears that his first was the Houston Home Journal in 1870.  This paper served Perry and Houston County, Georgia.  This is interesting to me because I was born in Houston County and know the Journal well.  Who knew a trip to Oak Hill Cemetery in Talbotton would connect me to home!

Something else I find interesting about Mr. Waterman is his love of the Georgia sweet potato. John was known throughout Georgia, and he was well liked among other journalists.  Oftentimes, friendly word jabs were traded back and forth between editors within their newspapers.  John was often involved, and I enjoyed reading the inside jokes even though I didn't always get them.  While living in Forsyth, Georgia, John's property was often referred to as the "potato patch." His love of sweet potatoes was well documented in the newspapers.  A blurb in the 10 November 1882 Macon Weekly Telegraph says this:  "John Waterman looks exceedingly young for one of his years.  He accounts for it on the ground of 'potatoes and prohibition.'"

Yes, John Waterman was described as a strong prohibitionist.  A paragraph from the 10 November 1882 Macon Weekly Telegraph provides this:  "Every man has his own opinions about spirits.  The spirits about which the most noise is made are not always the purest or the most profitable spirits.  People will differ; but, in our judgement, the straight turpentine spirits of southeast Georgia are a vastly better and more profitable article than the crooked corn spirits of north Georgia.  If the authorship of this inflammatory paragraph is demanded, we refer the inquirer to John Waterman, of Forsyth."

Mr. Waterman's death was covered well in the Georgia newspapers.  An article describing his life and death is included in its entirety below, in case someone else out there thinks John is someone they would like to have known.

Served His Apprenticeship in the Establishment of J. W. Burke & Co., and Was Well Known in Georgia as an Able Writer.

Atlanta, April 16 -- (Special) -- Col. John T. Waterman, the well-known Georgia journalist, and private secretary to Judge Crisp since his incumbency as speaker of the national house of representatives, died here this afternoon at 2:30 o'clock.  Mr. Waterman for several days has been in Atlanta during the past several days looking after some business in connection with the Hawkinsville Dispatch and News, of which paper he was at one time a proprietor, but since his duties called him to Washington he has been connected with the paper as associate editor.  He has been stopping while in Atlanta with his friend, Mr. C. H. Johnson, 261 Whitehall street.  Mr. Waterman was stricken with apoplexy last night at 12 o'clock.  From that time until his death this afternoon he was unconscious.

A number of prominent Methodists spent the morning at Mr. Waterman's bedside.

Deceased retired last night apparently enjoying good health, and in a cheerful mood.  At 12 o'clock Mr. Johnson heard heavy breathing in Mr. Waterman's room, and investigation showed the latter to be in an almost lifeless condition.  Three physicians were hastily summoned.  Under treatment Mr. Waterman rallied, but only for a few moments.  The attack was pronounced apoplexy.  At 1:30, the sick man was beyond the hope of recovery.  Mr. Waterman was born in Macon about fifty years ago.  He was married to Miss Annie Brown of Talbotton.

Mr. Waterman has been a prominent figure in Georgia journalism for the greater portion of his life, having edited the Monroe Advertiser, the LaGrange Reporter, the Griffin News, the Warrenton Clipper, the Thomaston Times, the Athens Banner-Watchman, the Evening Capitol of this city and the Hawkinsville Dispatch and News.

The remains will be taken to Talbotton for interment.

Mr. Waterman was well known in Macon, as also in nearly every other community in the state.  Here he spent his early life and received his education.  His father was Mr. Joseph Waterman, a photographer, whose establishment was in Triangular block.  John T. Waterman, when yet a lad, was apprenticed in the printing establishment of J. W. Burke & Co.  When he had learned his trade, he went to Forsyth and became prominently identified with the newspaper and business interests of that place.  From Forsyth, he went to Thomaston, where he engaged in a newspaper enterprise.  He was next known as editor and proprietor of the LaGrange Reporter, which paper he conducted for a number of years, building it up to the highest plane attainable by the Georgia press.  Mr. Waterman next took charge of the Athens Banner, which he continued to control until the lamented George P. Woods of Hawkinsville sold him an interest in the Hawkinsville Dispatch.  Editor J. R. Beverly was at the time in charge of the Hawkinsville News.  Editor Woods' health failed, the Dispatch and News were consolidated, and the two papers were purchased by the firm of Beverly & Waterman.  In this capacity Mr. Waterman continued until Congressman Charles F. Crisp was elected speaker of the house. Mr. Waterman received the appointment as Speaker Crisp's private secretary, maintaining only a nominal connection with the Dispatch and News.  As Washington correspondent for that paper, however, his weekly letters attracted considerable attention from the numerous readers, and were extensively quoted by the press.

Mr. Waterman's family reside in Hawkinsville.  It was generally understood that when his engagement was ended with Speaker Crisp, Mr. Waterman would again obtain possession of the News and Dispatch.