Noble Woman of Talbotton Passes Away After a Useful Life 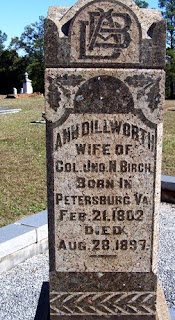 Mrs. Birch was laid to rest in Oak Hill Cemetery in Talbotton, Georgia. Here is a death notice from the 31 August 1897 Columbus Daily Enquirer:

Noble Woman of Talbotton Passes Away After a Useful Life.

She was a devout Christian and member of the Methodist church more than eighty years, having been a resident of Talbotton seventy years. She was the grandmother of Dr. J. B. Douglass, Of Talbotton; W. B. Hill, of Macon; Herbert Hill, of Monticello; Mrs. James Bishop, of Eastman; Thomas and Robert A. Matthews, of Thomaston, and W. C. Douglass, of Raleigh, N.C. The burial will take place here tomorrow at Oak Hill cemetery."

Also resting in Oak Hill Cemetery is Ann's husband. He actually has two tombstones. One is an old marker, while the other is a newer granite stone shared with his wife (pictured above). Here is a transcription combining information found on both: 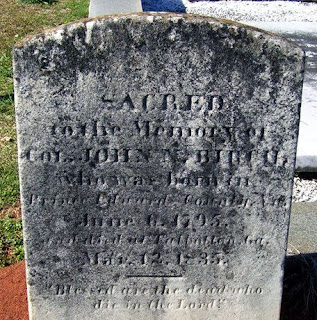