When She had Passed, it Seemed Like the Ceasing of Exquisite Music 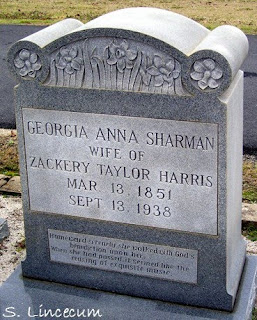 Homeward serenely she walked with God's benediction upon her;
When she had passed, it seemed like the ceasing of exquisite music.

According to research from the Family History Files of Rozine Britt-Bickel, Georgia was the daughter of Owens Carroll Sharman and Georgia Anna Miller. An obituary1 for Mrs. Harris reads, "Oldest Hotel Operator in United States Succumbs to Heart Attack at the age
of 88 Years." The 13 September 1938 item goes on to state, "Mrs. Georgianna Sharman Harris, 87, known throughout the nation as the oldest hotel keeper, died at her home here in Roberta today. Mrs. Harris and her husband have been active in Georgia hotel business since they began in Knoxville in 1879. Mr. Harris died several years ago and Mrs. Harris was stricken with a heart attack last Monday."
Footnote
(1) Source given at the Family History Files of Rozine Britt-Bickel: taken from "Crawford County Sesquicentennial (1822-1972)," Roberta, Georgia, November 16-19, 1972, page 44. Which took it from the "Georgia Boniface," a paper devoted to hotel interests in Georgia.