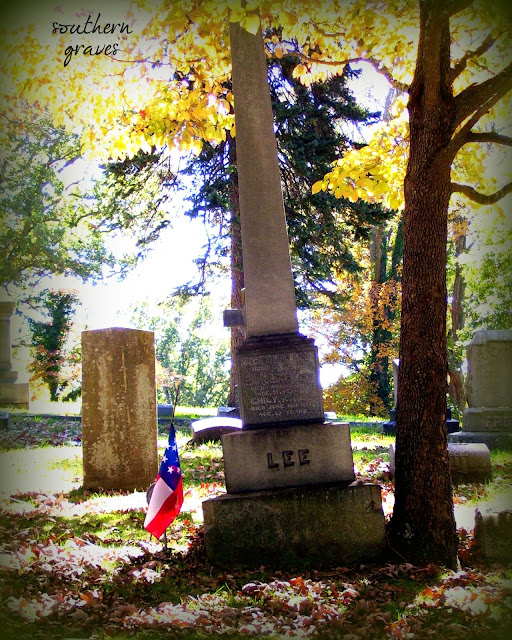 Laid to rest in Riverside Cemetery at Asheville, North Carolina are members of the Colonel Stephen Lee family. Transcription of the obelisk topped tombstone:

In Memory Of
Col. Chas C., Thomas, Stephen, and Joseph.
Sons of Stephen & Caroline Lee,
Who Died In The Southern Cause.
Blessed Are The Dead
Who Die In The Lord. 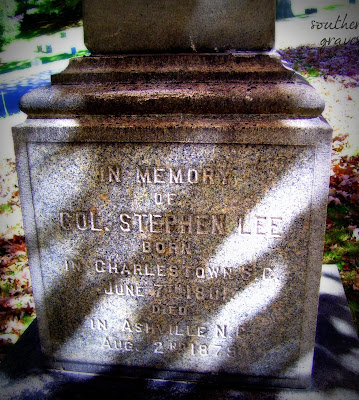 Here is what the Riverside Cemetery Walking Tour has to say about Col. Stephen Lee: "Colonel Stephen Lee, a distant relative of General Robert E. Lee, left Charleston to open a school in Asheville in 1846. His school, known as 'Lee's Select School for Boys' became famous across the south for its discipline and curriculum. He spent his entire life teaching at his school except for the years of the Civil War. During the war, Lee fought bravely for the Confederacy... At the end of his service, Lee formed a company called the 'Silver Grays.' These men were so well trained by Lee that on April 6, 1865, his small company of less than 300 men repulsed a Union army of 1,100 soldiers who came to Asheville with the intention of burning it down. After the war, Lee gave tracts of land in the Chunn's Creek section to his former slaves. Lee's land holdings before the Civil War included land from the top of Beaucatcher Mountain to the Swannanoa River."


Col. Lee's school for boys was far famed and many of the best citizens of this country and South Carolina remembered with gratitude, not only the drilling in Latin and Greek received from this most successful educator, but also the lessons in high toned honor and manhood imparted by this knight "without fear and without reproach." Col. Lee came from South Carolina and opened his school first in a large brick house built by himself on Swannanoa, known as "The Lodge..." Col. Lee afterwards moved to Chunn's Cove, where he taught until, at the call of his country, he and his sons and his pupils enlisted in the cause which they believed to be right. He was a graduate of West Point and distantly related to Gen. R. E. Lee. 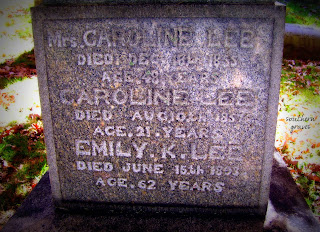 Col. Stephen Lee, son of Judge Thomas lee of Charleston, S.C., was born in Charleston, June 7, 1801, was educated at West Point and for some years after taught in the Charleston College. In September, 1825, he was married to his cousin, Caroline Lee, also of Charleston; they had fifteen children, nine boys and six girls. Some years after he was married he moved to Spartanburg, S.C., where he lived only a few years, moving with his family to Buncombe county, N.C. In Chunn's Cove he started his school for boys, which he kept up as long as he lived, except for two or three years in the sixties, a part of which time he was in command of the 16th N.C. Regiment, serving his country in West Virginia and the rest of the time drilling new recruits and preparing them for service. Besides serving himself, he sent eight boys into the Confederate army, four of whom gave their lives to the cause. At the close of the war he returned to his school duties and prepared many young men for their life work. He died in 1879, and is buried in the Asheville cemetery. 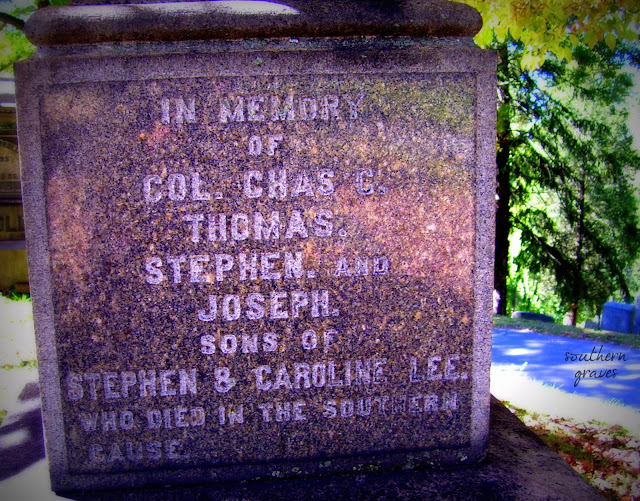