Killed By a Desperado 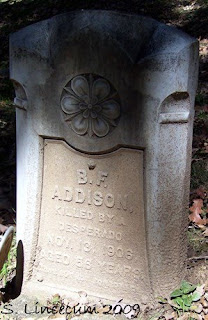 On the cold winter night of 13 November 1906, a crazed drunken man named Will Harris went on a shooting rampage that left five men dead. One unfortunate victim was Ben Addison. Mr. Addison owned a store at 53 Eagle street in downtown Asheville. He was shot when he opened his door to see what the commotion was about.

[Source: text from "Riverside Cemetery Walking Tour," which uses a script from a video entitled "Journey Beyond the Gates," produced by the students of Charles D. Owen High School -- the 1997 Advanced Placement U. S. History Class]