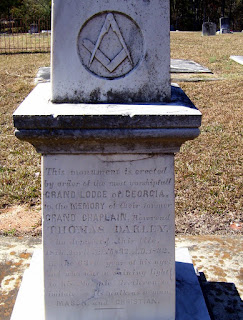 This monument is erected by order of the most worshipfull Grand Lodge of Georgia, to the Memory of their former Grand Chaplain, Reverend Thomas Darley, who departed this life, 18th April A.L. 5832, A.D. 1832, in the 63rd year of his age: and who was a shining light to his Masonic Brethren, to imitate in his walk, as a man, Mason, and Christian.

Rev. Darley was laid to rest at Waverly Hall Cemetery in Harris County, Georgia. According to a death notice found in a local paper, he left behind a wife and 16 children. On the back side of Rev. Darley's monument is the following epitaph:

"Calm, the good man meets his fate,
Guards celestial around him wait!
See! he bursts these mortal chains,
And o'er death the victory gains."

While the symbol and inscription on the gravestone clearly states Rev. Darley was a Mason, there are a couple of other clues you might not be aware of that further bolster this fact. Though I have yet to find a simple explanation as to how, the letters and numbers A.L. 5832 have ties to the history of Freemasonry.

Also, the epitaph is connected to Masonic history. A Google search of the first line of the epitaph, "Calm the good man meets his fate," reveals a poem written by David Vinton (1774-1833). Mr. Vinton was a prominent member of the Masonic fraternity as a member of Mount Vernon Lodge No. 4 of Providence, Rhode Island. He compiled and published a hymnal entitled "The Masonic Minstrel" in 1816. The epitaph on Rev. Darley's stone is the final stanza in a dirge included in the book set to "Pleyel's Hymn." A dirge is a somber song expressing mourning or grief, such as would be appropriate for performance at a funeral.

That leads me to Funeral Service: Most Worshipful Grand Lodge of Ancient Freemasons. While the link leads you to information from a pamphlet distributed in South Carolina, the information appears to apply to all members of the fraternity. Though I cannot say for sure how often this funeral ritual was actually performed (or if it was used at the funeral for Rev. Darley), here are a few highlights:

"No Freemason can be interred with the formalities of the Order, unless it be at his own request, or by that of some of his family, communicated to the Master of the Lodge of which he died a member (foreigners and transient brethren excepted); nor unless he has received the Master's degree; and from this restriction there can be no exception. Fellow Crafts and Apprentices are not entitled to funeral obsequies; nor to attend the Masonic processions on such occasions.

When the Master of a Lodge receives notice of a Master Mason's death, and of his request to be interred as a Mason, he must satisfy himself of its propriety; and then, being informed of the time appointed for the funeral, the Master may invite as many Lodges as he may think proper, and the members of those Lodges may accompany their officers in form; but the whole ceremony must be under the direction of the Master of the Lodge to which the deceased belonged, and he and his officers must be duly honored and cheerfully obeyed on the solemn occasion.

The proper clothing for a Masonic funeral, is a black hat, black or dark clothes, white gloves and a plain white lambskin apron, with a band of crape around the left arm above the elbow, and a sprig of evergreen on the left breast. The Master's gavel, the Warden's columns, the Deacon's and Steward's rods, the Tiler's sword, the Bible, the Book of Constitutions, and the Marshal's baton, should be draped with black crape. The officers of the Lodge and past Masters and Grand Officers, may wear their official jewels.

The brethren being assembled at the Lodge room, or some other convenient place, the Master of the Lodge to which the deceased belonged opens the Lodge in the third degree. A procession is then formed to the house of the deceased and thence to the grave...

...When the procession arrives at the gate of the church-yard, the Lodge to which the deceased brother belonged, and the mourners and attendants on the corpse, halt, until the members of the other Lodges have formed a circle round the grave, when an opening is made to receive them. They then advance to the grave; where the clergyman and officers of the acting Lodge take their station at the head of the grave, and the mourners at the foot. The Marshal will remove the apron from the coffin to be handed in to the Master at the proper time; the coffin is then lowered into the grave and after the clergyman has concluded the religious services of the church, (unless the same have been previously concluded) the Masonic service begins...

...[After words are spoken according to ritual] They then form a chain, with the left arm over the right, and march three times around the grave, while they sing the... [Pleyel's] hymn..."

More words according to ritual are spoken, and the members return to the lodge and close with the usual benediction.

Another interesting note connecting to Rev. Darley: he would've been one to perform a service such as this for a Grand Officer, during the time he was Grand Chaplain.

MisterNiceGuy said…
The answer to your question is anno lucis. The year of light. This is used instead of bc and ad. 4000 years is added to the ad calender that we use .Masons consider year 1 as the year the world was created.
August 25, 2019 at 5:47 AM

S. Lincecum said…
Thank you so much, MisterNiceGuy! This simple and clear explanation is greatly appreciated.
August 25, 2019 at 8:32 AM