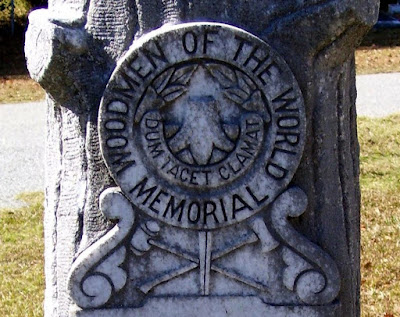 I've photographed many Woodmen of the World memorials, and I think this is the best image I've captured of their slogan, Dum Tacet Clamat. It translates to "though silent, he speaks."

Woodmen of the World is the largest fraternal benefit society with open membership in the United States. It is an insurance organization founded by Joseph Cullen Root in Omaha, Nebraska on the 6th of June, 1890.

The first certificate of membership was issued to William A. McCully of Independence, Kansas on the 29th of December, 1890. Six months later, Woodmen paid its first death claim on the life of teenager Willie O. Warner who drowned on the 14th of June, 1891, in Niles, Michigan.

Early Woodmen of the World policies provided for a death and a monument benefit. Gravestones were originally furnished to members for free and later were offered to those who purchased a $100 rider.

To learn more, visit "Woodmen of the World Memorials" on the Southern Graves website.

Kate and Mike said…
Kate and I found two or three Woodmen of the World grave markers in an old cemetery in Oregon City, OR. The "dum tacet clamat" phrase was badly weathered and only partially readable, but the markers are impressive: 5-foot tall "stumps".
September 17, 2011 at 3:49 PM

S. Lincecum said…
I've seen them ranging from small to tall. The tall ones are indeed impressive.
September 17, 2011 at 6:01 PM

Anonymous said…
I found 2 near my house in woosley cemetery south of Point TX. They were the first I've seen and definitely unique
April 8, 2014 at 9:37 PM

Unknown said…
Found one in Columbus, OH greenlawn cemetery. Email me, if you would like a pic. Meekowenn at yahoo
May 26, 2018 at 4:04 PM

Amber said…
I have two family members in Newport, At, that have the WOW logo on them. I found these two stones just recently, and wondered what “Woodmen of the World” was, and was totally blown away by the background of it!
April 29, 2019 at 8:57 PM

Brian.Phinazee said…
I stand corrected... I have found at least 6 markers, but it is almost midnight so they are hard to see. (Big Creek Baptist Church, Coolidge, GA)
October 17, 2019 at 11:36 PM