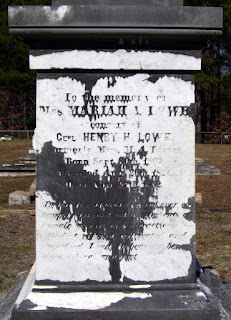 Laid to rest in Waverly Hall Cemetery; Harris County, Georgia are General Henry H. and Mrs. Mariah A. Tarver Lowe. Their marble tombstone has inscriptions on all four sides:

To the memory of
Mrs. Mariah A. Lowe,
consort of Genl Henry H. Lowe,
formerly Miss M. A. Tarver,
Born Sept 30th, 1807,
Married Aug 26th, 1821,
Died Nov 27th, 1852.
In but few characters was ever so happily blended all the elements of female virtues and attractions. Modest, refined, cultivated and dignified. Kind, forbearing, benevolent, liberal and just.

Father this cup of sorrow,
We'll drink as did thy Son,
Teach us in resignation,
To say "Thy will be done."

In Memory Of
Genl Henry H. Lowe
Who Was Born 4th Nov 1795
And Died July 8th, 1854
This stone marks the resting place of one whose influence and character were felt in his day: a man of strong will and unwavering purpose, of untiring industry and unyielding perseverance, he made for himself fortune, name and position. And while his excellent sense and sterling character gained for him positions of public preferment, his warm and generous heart won for him friendship which will long offer a tear to his memory. May the sod rest lightly on his brave and noble heart.

To live in hearts we leave behind, is not to die.

[Note: General Henry Lowe was a very prominent figure in Harris County, Georgia. He owned a large plantation, and even hosted a dinner for ex-President James K. Polk.]

Lewis Powell IV said…
I just came across this post and your marvelous blog! I'm a budding taphophilic blogger myself and just covered this grave. I'm glad to see someone else taking an interest in Southern cemeteries! Keep up the good work!
August 19, 2011 at 5:16 AM

As information, a You Tube channel, “Sidestep Adventures” posted a You Tube video on Dec. 17, 2020 regarding the gravesite of Gen. Lowe.
The video is titled “Visiting The 166 Year Old Grave Of A General”.

jeri said…
I found this page a few years back and searched to see if you have any more Lowe's as Henry is my 4th great grandfather. Thanks so much for posting the info about the video, I'll go check it out now.
December 29, 2020 at 11:08 PM