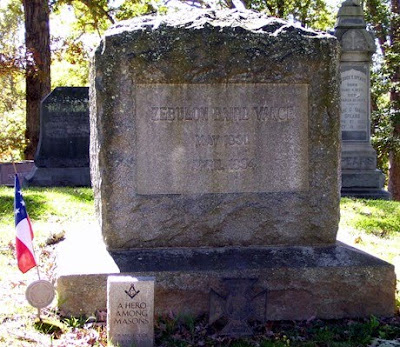 Riverside Cemetery
Asheville, Buncombe County, North Carolina
Zebulon Vance was a Confederate military officer during the Civil War, twice Governor of North Carolina, and U.S. Senator. He was a remarkable writer and became one of the most influential Southern leaders of the Civil War and postbellum periods. He was much beloved by his home state, as is conveyed in the following newspaper article describing his funeral.


ON THE SUNNY SIDE THE HILL
ZEBULON VANCE SLEEPS HIS ETERNAL SLEEP
Renewed and Continuous Demonstrations of their Great Love for Their Dead Senator, Made by North Carolinians Yesterday
Asheville, N.C., April 18 -- At the hour of noon today the remains of the late Zebulon B. Vance are being deposited in their last resting place overlooking the beautiful French Broad river in this "Land of the Sky," a fitting spot for the last repose of a great man.

The funeral train arrived just after dawn from Raleigh, with committees of both houses of Congress, the Governor and other officers of State and three cars of distinguished friends of the dead Senator.

Notwithstanding the late hour at which the train passed Hickory, Morganton and other stations, large crowds pressed into the funeral car and demanded to see the remains. The demonstration at Asheville is the greatest of the occasion.

The body was placed in the First Presbyterian Church at 8 o'clock, and from that hour until 11:30 thousands of people from his native county of Buncombe passed to take a last look.

An immense crowd of Confederate veterans, followed by different fraternal organizations, the Asheville Light Infantry, and Bingham cadets, filed by.

Mrs. Vance spent a half hour in private with her dead husband and asked that she be the last one to see his face.

The procession was then formed, reaching almost from the church to the cemetery, a distance of two miles.

The crowd that marched out to the cemetery was estimated at 10,000.

Friday will be observed here as memorial day for the whole State and an immense throng is expected.

The crowd thronged the stations along the way to Asheville, delayed the train by their urgent demands to see, at least, the casket, and they filled the funeral car with magnificent floral offerings. Each hamlet added beautiful flowers, marked "From the Ladies to Our Zeb," and when Asheville was finally reached the funeral car was opened for the last time, it required the aid of a company of militia to remove the floral tributes. The Asheville Light Infantry escorted the remains from the train to the church and mounted guards over them, while the reverent crowds passed to take a last look at the beloved familiar face. The scene was especially touching when the Confederate veterans took leave of their old commander. After these came several of the Senator's old slaves.

The procession to the cemetery was formed in the following order: Mounted police, Asheville Light Infantry, Bingham cadets, pall bearers in carriages, special escort of Rough and Ready Guards surrounding the hearse, Family of the deceased, Congressional committees, Governor and staff, city and county officers, Masonic Order, Survivors Association, Grand Army of the Republic, Odd Fellows, Knights of Pythias, Royal Arcanum and Knights of Honor. These were followed by different labor organizations and the entire city fire department.

The procession, both civic and military, numbered about 10,000, while thousands looked on as spectators. The streets through which the procession passed, were draped in mourning, and from the front of the county court house hung a large portrait of the dead Senator, while stretching from the belfry on both sides to the ground were cords, from which waved the marine signals, which spelled "We Mourn for Zebulon Vance."

The ceremony at the grave was exceedingly solemn and was conducted by Rev. Dr. Campbell of the First Presbyterian church, after which the floral offerings were gracefully placed and thus North Carolina buried a son whose place may be partly filled in the council halls of the nation, but never in the hearts of her people.

[Update: I continued to do a little more reading about Mr. Vance and came across an editorial from a 1905 newspaper regarding him and his career. While the article as a whole is an opinion, I believe it does provide a glimpse into United States, North Carolina, and VANCE history. I transcribed it, and it is available here on the Southern Graves website.]

Taneya said…
The first time I heard of him was when I went to UNC-Chapel Hill for grad school; the financial aid office is in the Vance Hall building named after him. Apparently, I didn't pay close enough attention in my NC history class growing up :-)
December 1, 2009 at 9:36 PM

S. Lincecum said…
We visited Asheville for a few days this past October. Vance stuff was everywhere! :-) I did not take the opportunity to visit the statue downtown or his boyhood home. Since reading more about him, I now wish I would have!
December 2, 2009 at 12:44 PM

Vance said…
You are absolutely right about Vance stuff everywhere around here. Probably one of the reasons I feel so at home. Nice bumping into you again. Keep in touch. -Vance
March 12, 2011 at 2:54 AM