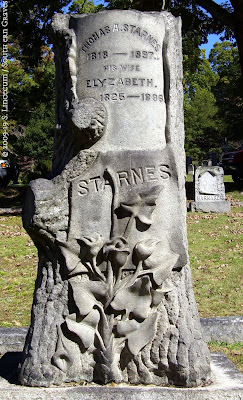 This beautifully carved "treestone" is located at Riverside Cemetery in Asheville, Buncombe County, North Carolina. I do believe it is one of the most life-like I've ever seen. This particular tree stump memorializes the STARNES family. On the back of the stone is a plaque with all the names of the family members, as well as birth and death years for each. 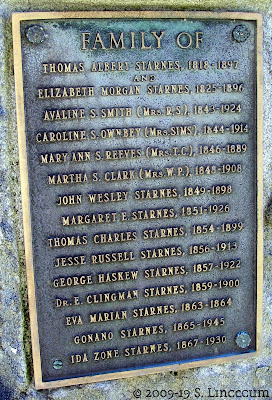 23 December 1898
Charlotte Observer, North Carolina
"JOHN W. STARNES, ESQ, DEAD
A Well-Known Educator of Asheville Succumbs to Disease
Special to The Observer.
Asheville, Dec. 22 -- Hon. John W. Starnes, a well-known educator of Buncombe, died at his home here to-day, of acute catarth[?] of the head. Mr. Starnes was a native of this county, 40 years old, was formerly superintendent of the Buncombe public schools for seven years and his administration was marked by ability and progressiveness. Some years ago he represented this county in the lower house of the General Assembly, his colleague being Gen. Robert B. Vance. Mr. Starnes always took a deep interest in the educational progress of the State and was for one term a member of the board of trustees of the State University. His death is deplored by a very large circle of friends through out Buncombe and western North Carolina. His wife and two sons survive him."

27 August 1913
"DEATH RECORD
JESSE R. STARNES
Asheville Pioneer Citizen Dies at Age of 60
(Special to The Observer)
Asheville, Aug 26 -- Jesse R. Starnes, one of Asheville's pioneer citizens, died at his home on North Main street yesterday, following a year's illness. Mr. Starnes was a native of this county and was a large property owner in this city. He has practiced law for the past 20 years and for several years has been interested in one of the city's leading undertaking and livery establishments.

The deceased was 60 years of age and is survived by a wife and two children. He was a consistent member of the First Baptist Church and held memberships in several fraternal orders which have lodges at this point.

The funeral services will be conducted Wednesday afternoon from the home of the deceased."