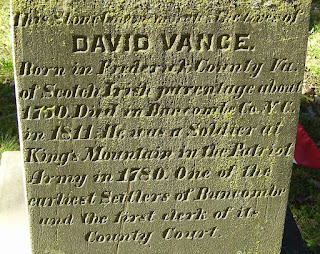 For this week's Tombstone Tuesday, I wrote about North Carolina's "greatest man," Zebulon Baird Vance. In a newspaper article about him that I found and transcribed here, Zeb's grandfather is described. Luckily, I had also photographed a stone while at Riverside Cemetery in Asheville, not far from where Zebulon was laid to rest, that memorializes this grandfather as well as a few additional members of his family. On each of the fours sides of the stone, a different family member is remembered.

David Vance
Born in Frederick County, Va, of Scotch Irish parentage about 1750. Died in Buncombe Co, N.C. in 1811. He was a soldier at King's Mountain in the Patriot Army in 1780. One of the earliest settlers of Buncombe and the first clerk of the County Court.

Priscilla Brank
Wife of David Vance
Born in Rowan Co, NC in 1756 of German parentage. Reared a family of eight children and died in 1836.

Robert Brank Vance, M.D.
Youngest son of David and Priscilla. Born in...[?]...1794. Died in 1827. He was a physician of much promise, well versed in English lit, and a politician of note. He served as member for this District in the XVIIIth Congress.

David Vance
Son of David and Priscilla, born in Reems Creek, Buncombe Co, NC July 15, 1792. Died Jan 14, 1844. Succeeding to the name and Virtues of his Father, was highly esteemed as a modest and upright citizen and Christian gentleman. He was an Elder in the Presbyterian Church.