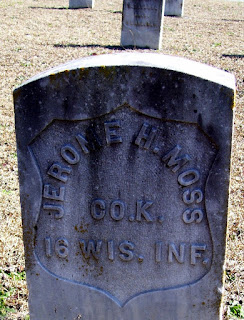 Jerome H. Moss was born about September 1849 in Wisconsin. He fought in the Civil War with Company K, 16th Wisconsin Infantry. According to American Civil War Soldiers, Jerome enlisted as a private on 30 December 1863. He would have been about fourteen years old. The following quote is attributed to him: "I lied about my age to get in, but would have lied a thousand times to get out."1

During his service, Jerome served as a drummer boy under General Sherman.2

On 6 November 1894 in Fulton County, Illinois, Jerome married Helen Bessie Bartholomew.3 They are together in the 1900 U.S. Federal census for Pierceton, Kosciusko County, Indiana. By 1910, Jerome and Helen had relocated to the "Shacktown" colony of Fitzgerald, Georgia. Jerome was the resident optician.