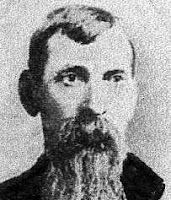 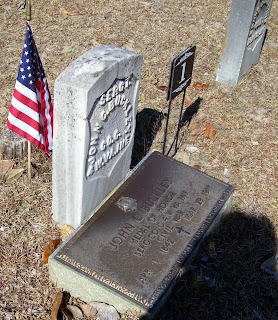 John C. Buckley was awarded the Congressional Medal of Honor for "Gallantry in the charge of the 'volunteer storming party'" at the Battle of Vicksburg, Mississippi on 22 May 1863. 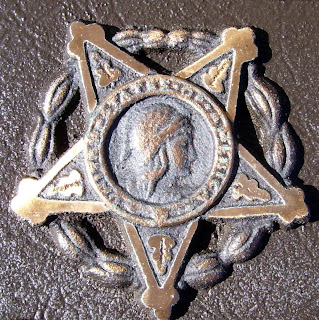 The Medal of Honor dates back to 1861, and you may read about its history here. The version of the medal on John's grave is a hybrid of the original and later versions. The inverted, 5-pointed star contains laurel leaves mixed with oak clusters. This represents victory and strength. Surrounding the circled insignia were once 34 stars, equal to the number of stars on the U.S. flag in 1862. Now, "United States of America" is found there. In the center of the circle is a portrait of a helmeted "Goddess of War."

Actions which earned Buckley the Congressional Medal of Honor are chronicled in The "Forlorn Hope" at Vicksburg in Deeds of Valor edited by W. F. Beyer and O. F. Keydel (1903). The chapter begins with "For superb gallantry and reckless indifference to death and danger, there is nothing in military history to excel the conduct of the "forlorn hope" that led the general assault on Vicksburg on May 22, 1863."


...General Grant had encircled the city on three sides with a line of battle twelve miles long, and on the Mississippi, which formed the fourth side, were Admiral Porter's warships. The strength of the enemy had been greatly underestimated, and it was decided to make an attempt to carry the city by storm, in order to avoid the tedium of a siege. The enemy's lines ran along the top of a bluff, and the point of attack selected was to the south of one of the forts. This fort, which was protected by a ditch twelve feet wide and five or six feet deep, rose about ten feet above the level and sloped up gently towards the enemy's guns. The face of the fort was perpendicular, the earth having been tamped, instead of being allowed to adjust itself. The point of attack was in front of the Second Division of the Fifteenth Army Corps, and on the afternoon of May 21st, each regimental commander of the division explained the plan of operations to his men and called for volunteers. One hundred and fifty men were required for a "forlorn hope" to lead the general assault and prepare the way for the real attack. As these men would be certain to draw the enemy's fire, there was little probability of any of them returning alive, and on that account it was decided not to order any man to go, but to depend entirely on volunteers. Each regiment was to supply its quota, and in view of the terrible risk to be incurred, orders were given that none but unmarried men were to be accepted...

John C. Buckley was one of the first to offer his services as a "volunteer stormer."