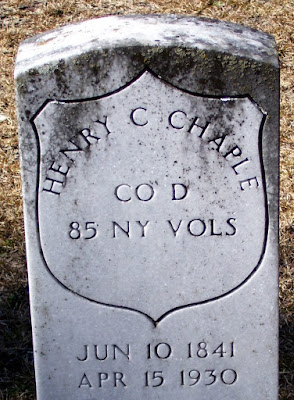 Pvt. Henry Chaple survived Andersonville. His brother did not.

Brothers Henry and Alfred Chaple were members of Company D of the New York Volunteer Regiment during the Civil War. They were both captured by the Confederate Army at Plymouth, North Carolina in April 1864 and sent to Andersonville, Georgia. There, a military prison designed to hold 10,000 POWs had just opened months before. By August of 1864, when Henry's brother Alfred died of diarrhea, the number of union soldier inmates was approximately 32,000.

I'm not sure how, but Henry Chaple survived Andersonville. He died 15 April 1930 and was laid to rest in Evergreen Cemetery at Fitzgerald, Ben Hill County, Georgia -- where the "Yanks and Rebs rest together."

See also >> My Journey to Visit the Brother that Did Not Survive.