Funeral Mound of the Mississippians

By S. Lincecum 29 July
[This was originally written for the Graveyard Rabbit Online Journal and posted there last week. I'm hoping a repost here will provide some additional exposure for the Ocmulgee National Monument for readers who may have missed it.]

Take a look at this photo: 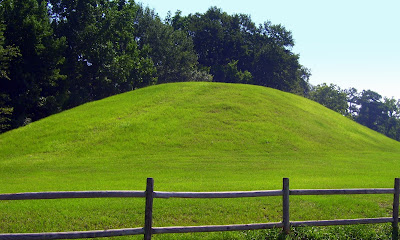 Archeologists estimate this mound that appears to be just dirt and grass contains about 100 human remains. It is a funeral mound of the Muscogee (Creek) Native Americans that settled along the Ocmulgee River more than one thousand years ago in what is today Macon, Georgia. This mound and several others are located within the boundaries of protected lands known as the Ocmulgee National Monument.

It is estimated that people have lived in the Macon area for thousands of years, dating back to the Ice Age. For the purposes of this article, we are focusing on a much later era. The “Mississippian Period” approximately dates from the year 900 to 1650. At the earliest it was a new way of life on the Macon Plateau, believed to have originated in the Mississippi River area. The Native people of this time and place are sometimes referred to as “mound builders,” as they constructed large ceremonial centers with huge earthen temple, burial, and residential mounds and earth lodges. Their economy was supported by agriculture, with crops such as corn and squash planted in the rich river floodplain.

I was very interested in learning more about the funeral mound during my recent trip to visit the Ocmulgee National Monument. The park rangers were very nice and attentive. The information was plentiful, and they were great “gurus.”

The funeral mound pictured at the beginning of this article was the burial place for village leaders and important people. Archeologists discovered over 100 burials within the mound, as well as log tombs (including a massive one on the lower level) and other structures at different levels. Log tombs are so named because of the rows of massive log posts running down the walls of the tombs, presumably supporting a low roof.

Evidence suggests that this mound was built in seven stages. A structure was built on top of each stage, probably to prepare the dead for burial and the accompanying ceremonies.

The present height is at the third stage. At the seventh and final stage of construction, it is estimated that the mound may have measured as much as 280 feet long, 100 feet wide, and 25 feet high.

Significant artifacts found during the archeological investigations of the 1930s uncovered a part of a human figure effigy and the remnant of a necklace. These further imply that high-ranking officials of the community were buried here. Copper and shell ornaments were found as well. 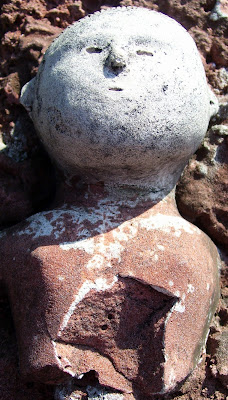 The Mississippian culture also used burial houses in their funeral practices to bury their elite members. The bodies would decompose in the house, then the bones would be cleaned and placed into burial urns or wooden tombs. Occasionally, grave goods would have been buried along with the body. These might include ornaments, tools, pottery, and food. Common people were buried underneath the house of their family. 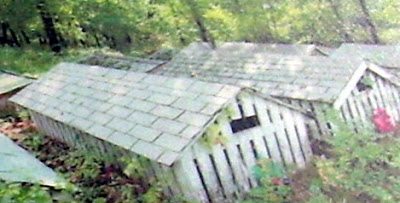 The road to demanded protection, preservation, and respect was a long one. In 1828, the “Old Ocmulgee Fields,” including the mounds, was surveyed and laid off into land lots incorporated into the city of Macon. Manufacturing enterprises arose, railroad lines were established, huge oak trees on the mounds were cut for timber, clay for brick manufacturing was mined near the Great Temple mound, and a fertilizer factory was constructed nearby.

Specifically, in the 1870s, the Central of Georgia Railroad destroyed a portion of the northeast corner of the funeral mound during its construction. Here is an old photo, as well as a new one. During my visit a train went right through the sacred lands. I was standing atop the temple mound, looking back to the earth lodge. 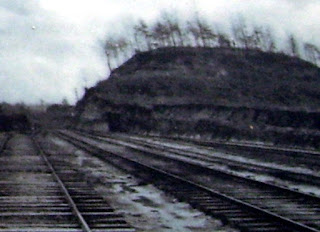 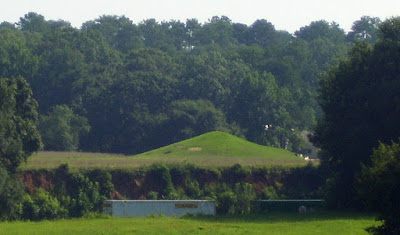 Even as late as 1933, a large portion of a mound was removed to use as fill dirt for a main street. Motorcycle hill-climbing left scars on the slopes and summit of the Great Temple Mound.

Finally a group of local citizens were convinced the mounds were of great historical significance and should be preserved. They sought assistance from the Smithsonian Institution, and the next year a bill was passed by Congress authorizing the establishment of a 2,000 acre Ocmulgee National Park.

In 1936, President Franklin D. Roosevelt established Ocmulgee National Monument and directed the National Park Service to preserve and protect 2,000 acres of “lands commonly known as the Old Ocmulgee Fields.” Unfortunately, only 678 ½ acres were acquired. Later an additional five acres were added, and the total is what is protected today -- only a fraction of what was originally desired.

Lands unprotected were destroyed in the 1960s for highway I-16 and again in the 1970s for a Sheriff’s Department firing range. Progress trumped history and sacredness once again.

More than 180 years ago, in 1828, a local newspaper reported on the mounds. Some would say the sentiment was more than 300 years too late, but if heeded, the mind set could have saved 150 years of desecration and destruction.


“The site is romantic in the extreme; that, with the
Burial mounds adjacent, have long been favorite haunts of our
Village beaux and belles, and objects of curiosity to strangers.
We should regret to see these monuments of antiquity and of
Our history leveled by the sordid plow -- we could wish that
They might always remain as present, sacred to solitude, to
Reflection and inspiration.”

I encourage anyone who is able to visit these awesome and historic lands. For more information, visit the Ocmulgee National Monument page on the official National Park Service site -- http://www.nps.gov/ocmu/index.htm.

Evelyn Yvonne Theriault said…
This is such an exciting article - we have nothing like this up here in Quebec and I had no idea that the original inhabitants would have built something so complex.
It just goes to show how much we still have to discover about those who came before us.
Evelyn
August 3, 2010 at 11:15 AM