Another Cause of Death Deciphered 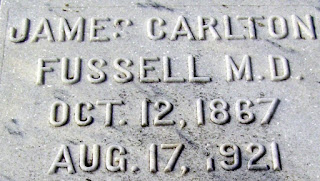 The marble gravestone for James Carlton Fussell, M.D. is located in Evergreen Cemetery at Fitzgerald, Ben Hill County, Georgia. He was only 54 years old when he died. While reading his death certificate to determine what the doctors said was the cause of death, this is what I saw:

Huh? That's what I thought. Using good ol' Google I was able to recreate enough of the letters correctly to come up with the proper term -- meningoencephalitis. Wikipedia describes it as a medical condition that simultaneously resembles both meningitis (inflammation of the protective membranes covering the brain and spinal cord) and encephalitis (infection or inflammation of the brain).

Dr. James C. Fussell died at the Piedmont Sanitarium in Atlanta, Georgia after suffering from this disease for at least six months. He was born in Georgia, the son of T. O. Fussell and Sarah Fletcher.

Mortuary and Funeral Notices from the 18 August 1921 Atlanta Constitution: