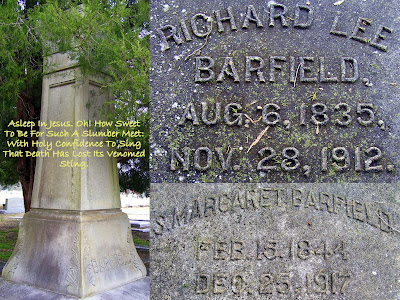 Richard Lee Barfield (1835-1912) and his wife Margaret (1844-1917) were laid to rest in Walnut Cemetery at Dooly County, GA beneath a large tree and capped family stone. The inscription on the family stone (typed on the photo) is the second verse of the hymn "Sleeping in Jesus."

On Richard's ledger marker are these words: "He Considered The Welfare Of Others Before His Own And Exacted More Of Himself Than Of Others." Margaret's reads that she was Faithful Through Life, and Victorious In Death.

Richard Lee Barfield, a veteran of the Civil War, was the son of Richard Barfield and Epsey Barnett. This family was prominent in Bibb County, GA. The Barfield family cemetery is located there and contains the remains of Richard Lee's parents and several siblings. I have never been to the Barfield Cemetery, but might just have to see if I can find it to "connect the stones."