Beneath the inscription on Handy Warren's large tombstone in Evergreen Cemetery (Fitzgerald, GA) is a cross and sword in a crown. Most often I see the cross with crown, but rarely see the sword in there as well. The cross in crown first and foremost is a Christian symbol of the sovereignty of the Lord. The crown means victory, and the cross means Christianity. 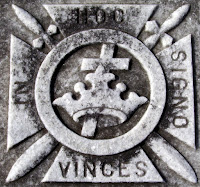 This cross with crown symbol also often means the deceased was a member of the York Rite Masons. Adding the sword might denote more specifically the Knights Templar. There are usually two swords crossed behind a Maltese cross with the cross and crown in the center.

My hunch that Mr. Warren was a member of a Masonic fraternity was confirmed by his obituary:

H. M. Warren, Fitzgerald
Fitzgerald, Ga, April 4 -- (Special) -- Handy Moore Warren died suddenly at 6 o'clock Thursday evening. He was taken ill on his farm a short distance from the city and was brought immediately to his home, but he never regained consciousness and died in a short time from apoplexy. Mr. Warren had lived in Georgia twenty years, fifteen of which having been spent in Fitzgerald. He was 51 years old and leaves a wife, three sons and one daughter. He was one of the first commissioners of Ben Hill county. The funeral was conducted by the Masons this afternoon, the business houses of the city being closed at that time by proclamation of the mayor."

According to census records, Mr. Warren was born in North Carolina. His sons were Earl, Needham, and William.