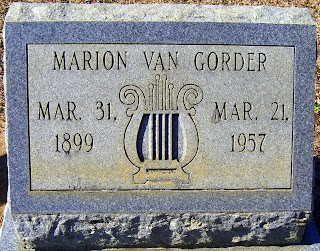 Etched in the granite plaque marker for Marion Van Gorder (1899-1957) is the image of a lyre. I briefly mentioned it once before on this Southern Graves blog, and I am doing so again because this is a much more clear image.

Wikipedia describes the lyre as "a stringed musical instrument well known for its use in classical antiquity and later." According to ancient Greek mythology, a lyre was associated with the virtues of moderation and equilibrium. The god Apollo is often depicted with a lyre. The term lyre is also used to refer to the work or skill of a poet.

Though considered a more playful instrument, the lyre is kin to the harp. In funerary art, the harp symbolizes divine music and heavenly aspirations.


[Other post where lyre is mentioned: Heaven Bore Away the Prize of John T. Whitehead.]