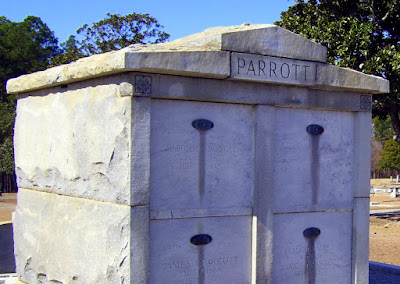 Harold L., born in Georgia, was the son of James A. and his first wife Addie A. Mozier. James and Addie were married in 1900 at Irwin County, Georgia. At the time, Fitzgerald was part of that county. James was a hardware salesman. By 1910, James was widowed and living with his two sons (Harold and Lauren) at 411 North Lee Street in Fitzgerald. Also listed in this household for the U.S. Federal census was Margaret, a housekeeper, and a boarder named Mabel Long. Mabel was 29 years old, divorced, and working as a law office stenographer. Both Margaret and Mabel had birthplaces of Canada. James was occupied as a retail hardware merchant.

In 1930, census records show there was a Mabel M. listed as James's wife, and a Margaret Shearer as mother-in-law. Again, both Mabel and Margaret had birthplaces of Canada. After his first wife passed away, it seems James married his housekeeper's daughter. They were still living at 411 North Lee Street in Fitzgerald. James was listed as a building proprietor, but no mention of hardware.

John Hileman said…
Perhaps I can help in clearing up a few things.

Mabel M. Long was the adopted daughter of Rev. Henry F. and Hannah Rebecca (Row) Long. The first she appears in my research so far is the 1900 census taken in Fitzgerald. I do not know what her birth name was.

Rev. Long was a Lutheran minister who passed away in 1924 in Harrisburg, Pennsylvania. The Long's had one natural daughter who died very young. Subsequently they adopted three children, two of whom were Canadian born.

I don't know why the Canada connection since both Rev. and Mrs. Long were born in Pennsylvania.

In 1897, Rev. Long located to Fitzgerald and became pastor of St. Paul's Lutheran mission congregation, serving until 1902 when he retired to Harrisburg.

It is possible that Margaret Shearer / Margaret Klineknett was the mother of James' first wife.