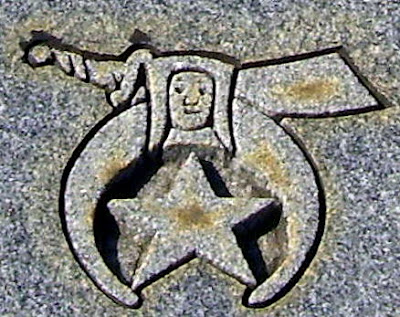 This is an example of a symbol for the Ancient Arabic Order of the Nobles of the Mystic Shrine, commonly known as the Shriners. It includes a scimitar (sword with a curved blade), crescent, star of Bethlehem, and head of a sphinx.

Seeing the "head of a sphinx" included in the Shriner emblem carved on a tombstone is a rarity for me. Most of the time, in my area it seems, that element is omitted.


In 1870, there were several thousand Masons in Manhattan, many of whom lunched at the Knickerbocker Cottage at a special table on the second floor. There, the idea of a new fraternity for Masons stressing fun and fellowship was discussed. Dr. Walter M. Fleming, M.D., and William J. Florence took the idea seriously enough to act upon it.

Florence, a world-renowned actor, while on tour in Marseilles, was invited to a party given by an Arabian diplomat. The entertainment was something in the nature of an elaborately staged musical comedy. At its conclusion, the guests became members of a secret society. Florence took copious notes and drawings at his initial viewing and on two other occasions, once in Algiers and once in Cairo. When he returned to New York in 1870, he showed his material to Fleming.

Fleming took the ideas supplied by Florence and converted them into what would become the "Ancient Arabic Order of the Nobles of the Mystic Shrine (A.A.O.N.M.S.)". Fleming created the ritual, emblem and costumes. Florence and Fleming were initiated August 13, 1870, and initiated 11 other men on June 16, 1871.

By the way, the first image posted is from the ledger marker for James Mallory Peavey (1905-1975) located in Evergreen Cemetery at Fitzgerald, Ben Hill County, Georgia. 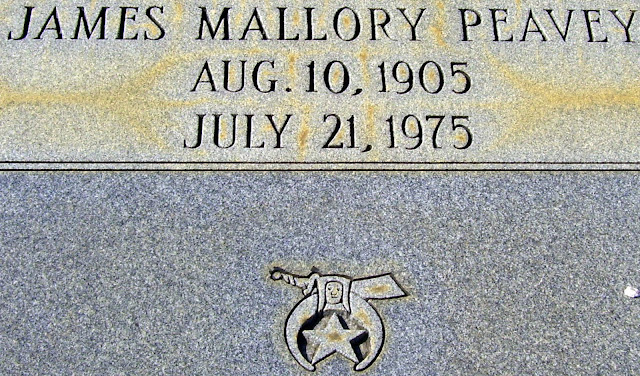 1. James A. Marples, "The Mystical Symbolism Found in the Emblem of the Mystic Shriners," Nebraska College - Masonic Societas Rosicruciana in Civitatibus Foederatis, http://www.masonic.benemerito.net/msricf/papers/marples/marples-symbolism.of.the.mystic.shrines.emblem.pdf .