Camilla's Treestone & the Supreme Forest of the Woodmen Circle 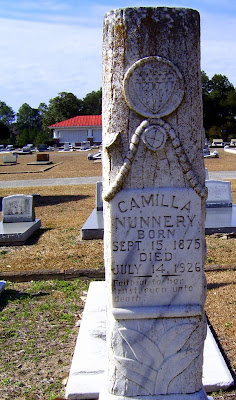 The treestone in place for Camilla Nunnery (1875-1926) at Evergreen Cemetery in Fitzgerald, Georgia shows she was a member of the Supreme Forest of the Woodmen Circle. This was a women's auxiliary to the Woodmen of the World fraternal organization and insurance benefit society. The emblem for the SFWC is a shield with stars and stripes and crossed axes. According to a 1913 publication of The Fraternal Monitor (Volume 23, Issue 8) -

"...The emblem used is the Shield. The colors adopted are lavender and green, instead of the National colors in the Shield. The emblem signifies that which protects or defends, and, therefore, symbolizes the grand and noble principles embodied in fraternalism -- Love and Protection."

From Woodmen.org: "The Supreme Forest Woodmen Circle occupied an important place in Woodmen of the World history from the time of its incorporation in 1895 until it merged with the organization on January 1, 1965.

The Circle was created in 1891. May Falkenburg, wife of Woodmen of the World co-founder F. A. Falkenburg, served as president of the women's auxiliary from 1891 to 1895. But, it was not until Root and Secretary John T. Yates took personal control of the organization's planning that the Woodmen Circle was born on September 5, 1895, and incorporated as a separate fraternal benefit society."

Anonymous said…
If you are open to having a guest blog poster please reply and let me know. I will provide you with unique content for your blog, thanks.
April 26, 2011 at 1:16 AM

S. Lincecum said…
One appears to be an axe and the other a mallet on the pin. Is that correct? The stone doesn't appear as defined to me, but maybe an axe and mallet was the intention.
March 9, 2012 at 5:49 PM