You Can't Always Trust the Dates on a Tombstone: The Case of Uriah Holden 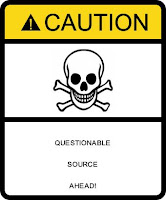 In the world of genealogy, a primary source is one recorded at or very soon after an event by someone with intimate knowledge of the event. Even though you might think the death date on a tombstone would be a primary source, this is not always the case. An obvious example of the contrary would be an ancestor who died in 1796 has a shiny new granite grave marker -- definitely added many, many years after the death and likely not by someone with intimate knowledge of the death.

I came across a curious case of weird dates on a tombstone while visiting the Irwinville Cemetery in Irwin County, Georgia. The stone in question is here:


Focusing on the side for Uriah Holden, the tombstone looks like a "period piece" and figures to be trustworthy. Only after I got home and started poking around to find a bit more about Uriah did I find some inconsistencies.

Census records are notorious for their inaccuracies, but these birth years are fairly consistent. Uriah was born between the years of 1843 and 1846. Right? Well, his tombstone gives the birth year of 1838.

I also found a Confederate pension application for Uriah Holden, submitted in 1912 from Bartow County, Georgia. In a section containing "Questions for Applicants to Answer," Uriah claims he was residing in Cassville, Georgia. A question posed was "How long and since when have you been a continuous resident citizen of this state?" The response, supposedly given by Uriah himself, was "I have lived in Ga since birth age 65." That would put his birth year at about 1847.

So there are problems with the birth date on the tombstone, but the death date should be accurate right? Hold up a second, I found issues there as well.

Uriah Holden and wife Elizabeth are found in the Irwin County, Georgia US Federal census taken 14 January 1920. Uriah's tombstone states he died a couple of weeks prior to the census taker's visit.

Furthermore, contained in Uriah Holden's Confederate pension file is an application by Elizabeth for the widow's pension. Information she provided and signed for states Uriah died 1 January 1921.

Why is Uriah's tombstone information off from what the truth seems to be? I cannot say for sure, but my theory is the tombstone was not placed until the death of Elizabeth. And a person with "intimate knowledge" regarding the birth and death of Uriah was not the one to provide information to the stone carver. Also, records suggest Elizabeth was Uriah's second wife. Maybe the stone was placed by Elizabeth with her knowledge of Uriah's birth being inaccurate, and the carver making a simple mistake on the death year.

I was hoping to find Uriah's death certificate among the ones available for Georgia online, but I have yet to find it. I think it, if filled out completely, might be an interesting read.