Goodwin Cemetery in Duluth, Georgia: A Bit of History

By S. Lincecum 10 February
As promised, I have some more information about the Goodwins of Gwinnett County, Georgia. Goodwin Cemetery is located on Highway 120 in Duluth, GA. I fit a visit in last year while attending the 2010 Atlanta Family History Expo. Since it is referred to as the Goodwin Cemetery, I tend to think this little silent city was begun for the Goodwin family. There are several other surnames to be found, however, and I do not know if they all connect to the Goodwins. There are African American burials as well as white, though they do appear to be segregated.

According to the Gwinnett County Historical Society, the genesis of the Goodwin family in the area dates back to the late 1700s and Philadelphia: "Mary Ann Roach came to America in the late 1700s as a stowaway on an Irish freighter. In Philadelphia, she met and married John C. Goodwin who was also an Irish immigrant. Records from around 1800 show the couple living in Rutherford Co., NC and having 5 children. A son, Joseph, acquired...property in Gwinnett Co. in May, 1835 from his father-in-law, William T. Graham."

Marriage records at Ancestry show Joseph Gooden (sic) married Elmina Graham 12 May 1830 in Rutherford County, North Carolina. When Joseph's father died, his mother came to live with him. Six generations of Goodwins have lived in the area. 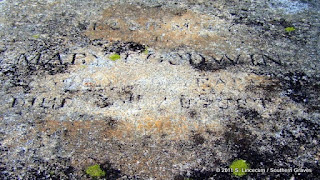 Though the stone ledgers atop the box tombs are very difficult to read, I think Mary Ann Roach Goodwin is buried in this cemetery. I do know Elmina Graham Goodwin was laid to rest there, as her tombstone still stands and is fairly easy to read. Her epitaph reads, in part: Having served her generation by the will of God she fell asleep. 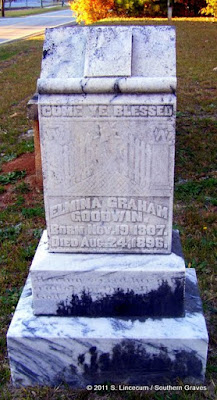 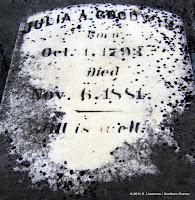 Julia A. Goodwin (1793-1881), Elmina's sister-in-law, was also laid to rest in Goodwin Cemetery. Census records state she was born in Pennsylvania, and her parents were born in Ireland.

Also buried within are Robert Emmet Goodwin and Frances Goodwin. I'm confident Robert was a son of Elmina's, and I think Frances was her daughter. Robert died at age 11, and Frances was just 20. Robert's epitaph reads, in part:

Hope looks beyond the bounds of time,
When what we now deplore,
Shall rise in full immortal prime,
And bloom to fade no more. 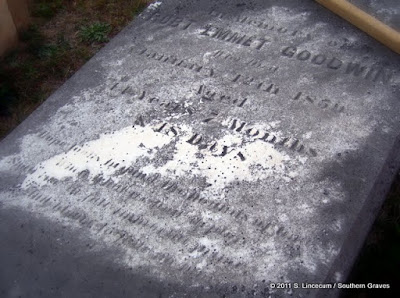