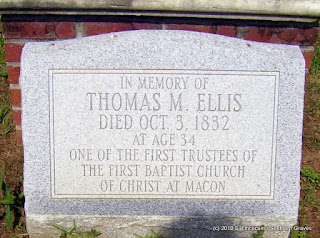 While the headline might seem familiar, this incident actually happened more than 175 years ago. -- Thomas Ellis was born about 1798.  His "untimely exit" came way too soon, about 34 years later, and under some interesting circumstances. His obituary ran in the Georgia Telegraph, Macon, on Wednesday, 10 October 1832:


Awful Catastrophe! -- Early on Wednesday morning last, in a rencontre with Henry Byrom, Mr. Thomas M. Ellis, long known as one of the most industrious and enterprising men in Macon, received a pistol ball in his abdomen, of which he died in about three hours. This afflicting occurrence has thrown a gloom over the whole town. Mr. Ellis was greatly respected for his moral virtues, his uprightness of conduct, his enterprising genius, and his untiring industry. One of the first settlers of Macon, the town owes much to him for its rapid growth and unprecedented prosperity. What Girard died for Philadelphia, Mr. Ellis was doing for Macon. He pried into every department of industry; and in every one was his influence felt.

Of his unfortunate connexion with the Macon Bank, (which was believed to be the occasion of the rencontre,) though we have for ourselves full faith in the innocence and integrity of Mr. Ellis, we are not prepared to satisfy the public. We know that he was preparing a full development of his relation with that institution; and we have no doubt, had he lived, that his innocence would have been fully established.

Mr. E. was a native of Philadelphia, and was about 34 years old. He was a respected member of the Baptist Church; a Vice President of the Georgia Agricultural Society; and a member of several other religious and charitable associations. He has left a bereaved widow, two helpless orphans, and a long train of relations and friends to mourn his untimely exit.

Byrom surrendered himself to the civil authority and has been bound over to answer his appearance at court.

A few earlier newspaper articles show that a Mr. Robert W. Fort was President of the Bank of Macon. This institution failed, and many of the public held him responsible. Thomas Ellis publicly backed Mr. Fort. Maybe this angered some folks.  It seems Mr. Byrom thought Mr. Ellis was connected to the failure somehow, but I'm not sure why this agitated Byrom so.

In the latter part of November 1832, less than two months after the death of Mr. Ellis, Henry Byrom was charged and tried for his murder. The testimonies of the courtroom drama were retold in the Georgia Telegraph: "The unfortunate rencontre of the defendant in this case with Thomas M. Ellis, in the streets of Macon on the 3d October last, which resulted in the lamented death of the latter, having produced a good deal of excitement in this community, we annex the following summary of the trial, which took place in this town last week, before his honor Judge Strong..."

First up for the prosecution were John Ellis and William Ellis, brothers of the deceased. They each described the scene after "hearing the report of pistols." Both found their brother on the ground, raised up on one elbow, on the street in front of his home (on Walnut street in Macon). Henry Byrom was standing near him, and Thomas supposedly said to Byrom, "Draw a pistol on me, will you?"

In the cross examination of William Ellis, he could not recall what other witnesses were present or whether or not they were white. John Ellis admitted his brother Thomas was armed. Other individuals were heard to have said Thomas Ellis was a "fighting man" and a "rascal."

Witnesses for the defendant claim Thomas Ellis had "a pistol drawn on" Byrom.

"...The trial consumed the best part of two days, The case was submitted to the jury about 11 o'clock P.M. on Thursday, who, after being absent about half an hour, returned with a verdict of Not Guilty. 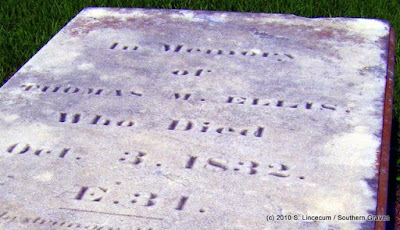 Mr. Ellis was laid to rest in Macon's Old City Cemetery. His bricked box tomb is one of the few still standing.

Anonymous said…
http://books.google.com/books?id=3HQDAAAAQAAJ&pg=PA266&dq=Henry+Byrom,+Mr.+Thomas+M.+Ellis+macon+georgia&hl=en&sa=X&ei=uwrbUs_sNM2PkAeW9IGwDQ&ved=0CCkQ6AEwAA#v=onepage&q=Henry%20Byrom%2C%20Mr.%20Thomas%20M.%20Ellis%20macon%20georgia&f=false Thought you might like this. Would rather to hear what L L Knight has to say about the case, but here is one, certainly not unbiased, retelling. Enjoy your Southern Graves blog very much. Jeannie Weller Cooper, PC, FL
January 18, 2014 at 6:18 PM

S. Lincecum said…
Thanks for the link and great read with added information. Interesting to know Byrom's demise.
January 21, 2014 at 8:27 AM