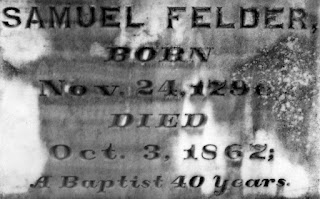 The FELDER family of Perry, Georgia seems to have been pretty prominent in their time. There are two family plots side-by-side in Evergreen Cemetery that contain the remains of some of the family members. The patriarch of the family is Samuel Felder of South Carolina. He was born 24 November 1796 and died 3 October 1867. Samuel was married to Ann, born 25 August 1803 and died 8 September 1890. Also buried nearby is Samuel's son Henry B. (1828 - 1878). 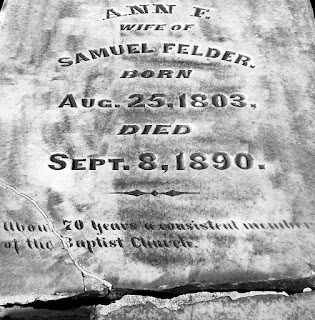 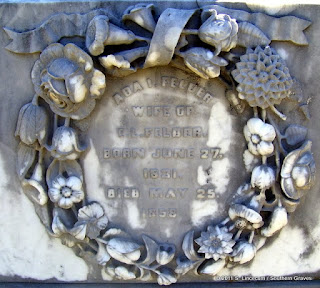 When poking around about the Felders, I found Confederate Applications for Presidential Pardon for both Samuel Felder and his son Edward.  Edward basically stated he was unaware the delegates he elected to the State conventions would go for secession.  He expected other means to be tried.

Samuel was a little more involved with the "rebellion." Not only did he approve secession, but he also provided for the Confederate Army in the form of money and supplies.  He did state, however, that he believed the politicians when they initially said that secession would be a peaceful solution to the "strife" between the North and South regarding the "slavery question."

Neither man stated he believed slavery was wrong at any time.  In fact, both were slave owners.  In the 1860 Houston County, GA federal census, Edward owned 30 slaves.  In the same census, Samuel Felder was listed as the owner of 20 slaves with a combined real and personal estate value of $107,152.  While these were not the largest or wealthiest, they seemed to do just fine for themselves.

Both statements had sounds of a "form letter," but there were a few subtle differences. Both described secession as a "great mistake." Edward stated the following:  "Your Petitioner has informed his former slaves that they are free, and made a fair and liberal contract with them, which has been approved by the Commandant of this post. and realizes and acknowledges the fact, that slavery is forever extinguished." Samuel simply stated, "I recognize the fact that slavery is dead & cannot be revived."

Both men had to take and sign to the Amnesty Oath. I don't know if it was a bitter pill to swallow for either man. But the fact they lost a son and brother in the war might have made it tougher. Samuel Felder, Jr. enlisted and fought with Company C, Georgia 6th Infantry Regiment. He died from wounds 1 June 1862, most likely in Virginia during the Battle of Seven Pines.

I transcribed both Samuel's and Edward's application. You may read them here and here, respectively.