The Old City Cemetery in Macon, Georgia has grabbed my attention once again. I think my feelings of sadness and anger are what keep bringing me back, though no one who may be considered responsible for its ruination is even remotely around for me to direct those feelings towards. Bibb County, GA was established in 1822, and the city of Macon, the county seat, was chartered in 1823. The Old City Cemetery was laid out soon after, being used between the years of (roughly) 1825 and 1840. As you might imagine, the pioneers, founders, and builders of Macon were interred there. I've been reading old newspaper articles about the cemetery and have seen numbers as high as 700 regarding interments. I can document less than 60 burials, and there are even fewer than that with visible markers. 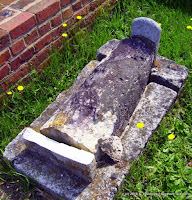 In a February 1891 article in the Macon Telegraph, a sad story of the then-current state of the cemetery was told.


The morning sun never touches those long forgotten graves, save where the beaten path has laid the long grass and undergrowth. The tombs marked with stones, graved with the loved one's name, are the haunt of the hunted thief, the loafer and the tramp. The wild creepers have twined themselves around the broken shaft and they, too, hang dead and swaying in the winter wind. It is a wilderness, a ruined necropolis, the habitation only of dogs and vermin, the waste land in the slums of a city. 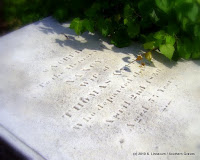 At the time of the article, though, it seemed the forgotten cemetery was going to be reinvented at another site. Reported in the same space: "...it has been ordained by the city council that the 'old cemetery' shall be a cemetery no longer, but that its contents shall be removed. The crumbled bones and grinning skulls that laugh at living men are to be removed and placed in the new cemetery of Rose Hill."

Unfortunately, soon after the city council's decision, an injunction was issued disallowing the city the ability to remove any of the remains. Subsequent articles in the years of 1893, 1907, and 1919 suggest a removal of remains never took place. That is, save one mention. Oddly enough, it is in an article dated 1881. This, of course, is about ten years before the city council decision. From the Georgia Weekly Telegraph, Journal & Messenger (describing Rose Hill Cemetery): "This celebrated burial place was laid out in 1840, and to it were transferred most of the remains then interred in the old cemetery just below the city." 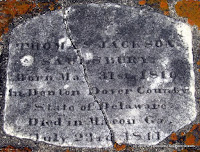 Though I do know there were some re-interments when the new Rose Hill Cemetery opened, I believe what this article is referring to is the transferring of the Confederate dead who died in the Macon hospital during the Civil War from the old city cemetery to Rose Hill. There were hundreds of such soldiers moved in the 1870's.

At the very least, it is difficult to say exactly how many burials are still in the Old City Cemetery, but I wager it is more than meets the eye. Another 1891 article offers this conjecture: "There are many thus, both male and female, whose bones lie in that neglected graveyard. The record book, on which was entered every burial, has long ago been lost or destroyed. It is estimated that there are more than one hundred bodies of the white population interred there whose graves cannot be identified."

All of these research findings (or lack thereof) have prompted me to set up a separate page on the Southern Graves website for Macon's Old City Cemetery. I have transcribed old news articles and compiled a listing of close to 60 documented burials, also linking to several transcribed obituaries.

If you have information about the cemetery, especially any additional burials (even those removed to Rose Hill), I hope you will consider sharing by either commenting here or emailing me. Addresses are located in the footer of this page.

Taphophile said…
A very sad situation, indeed. It always pains me to see an old forgotten cemetery with toppling stones and sunken graves. I hope you are able to piece together most of the history of that old cemetery. Best of luck.
March 10, 2011 at 10:42 AM