By S. Lincecum 05 May
Saturday, May 7th, 2011 marks the 96th anniversary of the sinking of the Lusitania by a German u-boat off the coast of Ireland in World War I. I don't know a whole lot about the sinking, so was doing a little reading on the subject yesterday. More than one thousand people lost their lives, and about 130 of those lives lost were American (I see different numbers in different articles, ranging from 124 to 128). I also found a list of "notable" men, women, and children who were passengers on the ill-fated vessel. Some survived, but most did not. Entire families were lost at sea. Many, many bodies were never even recovered.

On that list as one of the lives drowned with the Lusitania was that of a noted genealogist, Mr. Lothrop Withington. He was memorialized in the New England Historical and Genealogical Register (Volume 70, published 1916) in the section entitled "Report of the Historian: Necrology for 1915."


LOTHROP WITHINGTON of London, England, a resident member since 1897, was born at Newbury, Mass., 31 January 1856, the son of Nathan Noyes and Elizabeth (Little) Withington, and perished off the coast of Ireland, in the destruction of the Lusitania, 7 May 1915. He was descended from Henry1 Withington through Richard,2 Philip,3 Ebenezer,4 Philip,5 Joseph Weeks,6 Leonard,7 and Nathan Noyes,8 his father. The Withington family lived in Dorchester, Mass., until Leonard7 was called to Newbury in 1816 as minister of the First Church.

Lothrop Withington was educated at Dummer Academy and at the high school at Newburyport. When he was eighteen he went abroad and lived in London and Paris. He was a newspaper correspondent, and also wrote for magazines...

When a boy he became interested in genealogical study, to which he afterwards devoted much of his time. In London he was engaged in genealogical research some years before Mr. Henry Fitz-Gilbert Waters retired from the field, and the latter, when he gave up his work in England, placed in Mr. Withington's hands his genealogical notes, containing his gleanings from English records which had not been published in the NEW ENGLAND HISTORICAL AND GENEALOGICAL REGISTER. Mr. Withington in the course of time considerably increased this manuscript collection, and it has recently been purchased by the Essex Institute at the auction sale of Mr. Withington's library. Mr. Withington did a large amount of work as a professional genealogist, and was a contributor to various genealogical publications in the United States. In carrying on his work as a genealogist he made frequent journeys to New England, and he was returning to London after one of these visits to his native land when, with hundreds of other non-combatants, he became a victim of the ruthless and savage submarine warfare carried on by the orders of the German Government.

"Virginia Gleanings in England" was a long series of articles published in The Virginia Magazine of History and Biography, commenced by Mr. Withington in 1903. The last issue to have his name listed as primary contributor was January 1916. For the three years following, the series was in the care of Leo Cullenton, but based on research material left by Withington.

Not mentioned in Lothrop Withington's memorial in the Register is that he was married to Caroline Augusta Lloyd at London in 1892. Caroline was a sister of Henry Demarest Lloyd. Caroline and Lothrop had no children. 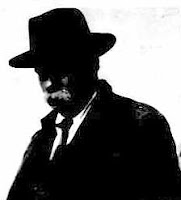 Mr. Withington's 1915 voyage on the Lusitania was not his first. He traveled on that ship several times, even as recent as less than five months prior to its sinking. He arrived in New York on the Lusitania just in time for Christmas on 24 December 1914 from England. Lothrop's 1915 passport application, issued 22 April, detailing the purpose of his trip as to resume residence in London, is online at Ancestry.

Anonymous said…
Excellent line up. We'll be linking to this wonderful write-up on our internet site. Sustain the great producing.
October 22, 2011 at 6:44 AM