Our Mother Here Lies Under Ground 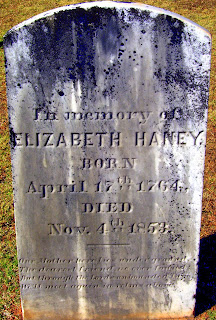 Our Mother here lies under ground,
The dearest friend we ever found.
But through the Lord's unbounded love,
We'll meet again in realms above.

Elizabeth was a former widow of Moses Liddell, a lieutenant and captain for the South Carolina militia during the American Revolution. She received a pension of $424 a year from 1836 until her death in 1853. In her Revolutionary Pension application at Ancestry, Elizabeth declares she knew Moses because their families lived near each other in South Carolina. Elizabeth married Moses Liddell 16 September 1784, and they had several children. Moses died 2 August 1802. Almost twelve years later, Elizabeth married Thomas Haney 15 June 1814. Elizabeth was widowed again in 1821. 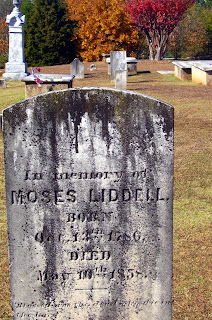