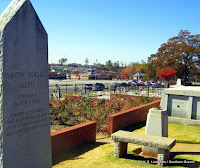 The Fairview Memorial Garden at Fairview Presbyterian Church in Lawrenceville, Gwinnett County, Georgia was "established by Dr. Fred A. Moss in memory of his parents James M. and Ora Russell Moss, and of his great-grandparents James S. and Nancy Aiken Russell." On the back of the granite memorial marker pictured above at far left, is the following: 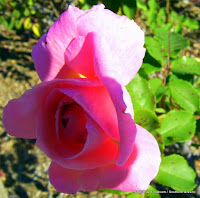 "Yet Ah, That Spring Should Vanish With The Rose!
That Youth's Sweet-Scented Manuscript Should Close!
The Nightingale That In The Branches Sang,
Ah Whence, And Whither Flown Again, Who Knows! - E.F."

Though my visit was in the fall of last year, I could envision the rose bushes all greened up and beautiful. There's a nice walkway with a few benches, as well as a sundial. Each bench contains a sentiment about death and / or the rose. Also during that visit, I wondered about Dr. Moss. Who was this person who not only likely financed this memorial garden, but also chose to be buried within it instead of "inside" the church graveyard?

I learned quite a bit about Dr. Moss when I began to research his story. He was born in Western North Carolina, but his parents soon after migrated a little ways south into North Georgia. Fred attended to his formative schooling at Hiawassee Junior College and Young Harris. He graduated from Macon's Mercer University in 1913. At that young age of twenty, Fred became the superintendent of schools at Alma, GA. By 1921, he had already obtained a masters degree from Columbia University, and was Professor of Psychology at George Washington University (from where he received a PhD in 1923). He continued his distinguished career as a professor, physician, and psychologist, adding author to his titles in the late 1920's and early 1930's. In 1936, he opened and directed his own Moss Sanitarium in Alexandria, Virginia. Which, by the way, contained a rose garden that yielded "enough roses for a vase to be placed in each patient's room from early May until November." 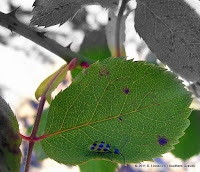 In a white-columned hilltop mansion on a plantation-like estate in Alexandria is where Dr. Moss was the last 30+ years of his life. There, too, was a 500 plant rose garden. He also spent some of his time on advisory and directory boards of banks, as he became well acquainted with the stock market. He made good there, as well.

About 1965, Dr. Moss published another book entitled The Quest of Happiness, containing verses and quotes reflecting his philosophy on life. One such quote:

Whether to Arlington or to old Fairview,
some such place you'll go when life is through,
And what you've done or been will be forgot,
No matter what you do or fail to do.

Fairview, of course, refers to the church in Lawrenceville that his great-grandfather James Russell helped build, and where Mr. Russell and wife were laid to rest upon their deaths. Though he passed away at his Alexandria, VA home in 1966, Fairview was the final resting place chosen by Dr. Moss, instead of ol' Virginia. Why, I'm not sure. Maybe the lure of being by family for all eternity was too great to resist.


Here Blooms The Rose, For Old Times' Sake It Grows,
To Speak Our Love For Those Who Here Repose.
Come Kiss Its Lips And Whisper In Its Ear,
It Might Pass On Your Message, Ah! Who Knows?

Note: Much of the information for this post came from the Fred A. Moss Charity Trust.