By S. Lincecum 27 June
Harriet Eva Orr Graham Strickland was born on Christmas day of 1845 in Lawrenceville, Georgia to James M. Orr and Mary Ann Cobb. After two marriages (being widowed both times) and four children, Eva entered into eternal rest 10 July 1897 in Atlanta, GA. A lot of life in less than fifty-two years.

Eva was laid to rest next to her sister Emma Orr Bates in Lawrenceville Historic Cemetery at Gwinnett County, GA. 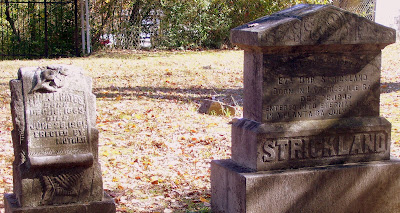 
In Memoriam.
The remains of Mrs. H. Eva Strickland who died at the home of her daughter in West End last Sunday morning, were carried to Lawrenceville last Sunday afternoon, where the interment took place, Rev. Dr. Craig, of Atlanta, officiating.

Mrs. Strickland had many friends and relatives in Atlanta and over the state who will be pained to learn of her death. Before her first marriage to Major Robert Howell Graham, of Warsaw, Ga., just after the close of the late war, she was Miss Eva Orr, and was born and reared in Lawrenceville and lived there for many years. Her first husband died soon after their marriage, leaving one daughter, Mrs. Edward G. Warner, of this city, who survives her. About fifteen years ago she married Dr. B. M. Strickland, of Cave Spring, Ga., where she had since resided up to some ten months ago, when she came to Atlanta, thinking the change would be beneficial and her health regained thereby.

This, however, was not to be, and after months of suffering, which she bore with heroic fortitude and patience, she passed away, thus ending a life that was full of deeds which will live forever in the hearts of those who knew her so well.

Three children by her last marriage, Berta, Lucile and Benjamin Strickland, also survive her, her husband, Dr. Strickland, having died about four years ago.

God in His wise providence has called home one of His faithful servants, whose delight was chiefly in doing good for the happiness she might give to others rather than that the world should know of it.
Atlanta, Ga, July 12, 1897.