Mamie Williams Kelley: One of the Most Popular Matrons of Lawrenceville

By S. Lincecum 10 June
Mamie Craig Williams was born in Lawrenceville, Georgia to J. Craig Williams and Rebecca Byrd.1,2 She likely married Otis S. Kell[e]y some time after the 23 January enumeration of the 1920 US Federal Census which listed Otis as single with his parents Giles and Ada on Crogan Street in Lawrenceville.3 At best, the marriage lasted less than two years. The couple being parted by the death of Mamie. 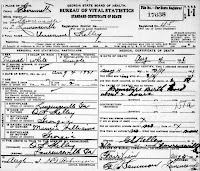 Resting near Mamie is her child Otis, Jr., born prematurely on 4 August 1921. Baby Otis lived but two hours, unnamed at the time of death.4,5 The death certificate was signed by G. S. Kelley, M.D. I believe this to be the father of Otis, Sr., listed as Giles S. Kelly in the 1920 US Federal Census with an occupation of medical doctor.6 It is unclear whether the child was a boy or a girl. The certificate was filled out listing the unnamed child as a female, but Dr. Kelley referred to the baby as "him." Regardless, Grandpa Kelley likely presided over the birth and death of his grandchild. And I'm sure he was present at the funeral and burial the following day.7

Two weeks later, to the day, Mamie would join her newborn child in Fairview Cemetery.8 Her obituary from The Constitution (Atlanta, GA):

MORTUARY
Mrs. Otis Kelley.
Lawrenceville, Ga., August 29 -- (Special.) -- Mrs. Otis Kelley, age 30, died at a local hospital in Atlanta early Sunday morning of appendicitis. The remains were brought to Lawrenceville and the funeral and interment held at Fair View church Monday. Mrs. Kelley was formerly Miss Mamie Williams, of Oakland. She is survived by her husband and father, J. Craig Williams, and two sisters, Ruth and Susie Williams, all of Oakland.

She was a member of the Presbyterian church and one of the most popular matrons of Lawrenceville.