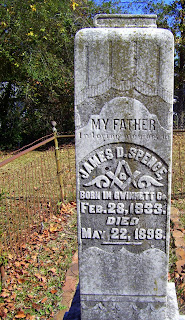 James D. Spence was born 28 February 1833, a son of McAlvin and Elizabeth Spence. His tombstone states James was born in Gwinett County, Georgia, but I question that. Simply because McAlvin Spence was so prominent in Harris County around the time of James' birth.

As alluded to, James is listed with his father, McAlvin's second wife Martha, and six siblings in the Harris County, Georgia Federal census for 1850. A few years later on 24 July 1853, James married Francis Louisa Patrick in Gwinnett County, GA. It appears James spends the rest of his life there. In 1860, Jas D., Francis, and their son John are in Lawrenceville where James is occupied as Postmaster.

James did not serve in a soldier capacity during the Civil War, but was deemed a Rebel Postmaster by the U.S. Government and had to apply for a Presidential Pardon about 1865. A couple of reasons as to why James felt he deserved a pardon are transcribed from his application here:


"1st Because he did not actively participate in said rebellion, or at any time, take up arms against the Government of the United States during the same, but that he did on the contrary use every [available?] means to evalle such service, and did to prevent being taken into the Confederate army as a conscript employ a substitute to take his place therein.

2nd Because he did not seek or accept said office for the purpose of giving any aid whatever to said rebellion, but that he held said office from about the year 1855, up to the time when said state seceded and that he did not afterwards seek to continue therein but was requested so to do, by the Confederate authorities, and that he consented to remain therein, for the various reasons, that he being a poor man with a family to support could thereby retain his former employment, that to do so would be an accommodation to the people __?__ in the office, and that he could thereby more easily evade military service in the Confederate armies."

I wish I knew more about James' feelings on the politics of the Civil War. A biographical sketch of his father in Memoirs of Georgia, states that McAlvin, as well as James' grandfather and great-grandfather fought for their country when duty called, dating back to the Revolutionary War. Before the Civil War, McAlvin was a plantation owner and slaveholder in Harris County, GA. Did James fundamentally oppose slavery and/or secession? Or did he simply not want to battle for the opposite?

In 1880, James and his wife are still living in Lawrenceville. This time, James is occupied as a merchant. A few years later the son of James and Frances, John Howell, died at the young age of 24 years. Frances followed her son almost eight years later on 13 June 1891. About five months after that, on 10 November, James was married a second time in Gwinnett County to Alice Cates.

James D. Spence died 22 May 1898. He, wife Frances Louisa, and son John Howell were all laid to rest in Lawrenceville Historic Cemetery of Gwinnett County, Georgia.

Dorene from Ohio said…
Dear Southern Graves,
I was fascinated by your FlipCard view.
It is great! Thanks for tipping me off to a new application!
July 23, 2011 at 7:23 PM

Dorene from Ohio said…
Southern Graves,
I discussed your Flipcard feature at my blog:

Dorene from Ohio said…
How did you get the Flipcard message in your sidebar? I am a hopeless amateur at blogging!
July 23, 2011 at 7:37 PM

S. Lincecum said…
Thanks for the mention, Dorene! It's easy to get it in your sidebar or wherever you want it using your template. Just add a "picture" Blogger element using the jpg image you created of your blog in the flipcard view. You should be able to add a caption and link when setting it up.
July 23, 2011 at 7:50 PM

Dorene from Ohio said…
Mission accomplished...so you are not only a terrific blogger, but you are also a wonderful instructor! Thanks again!
July 23, 2011 at 7:59 PM